A Guide to Clematis Street Nightlife

Kapow!
When Henry Flagler began developing the acres of land on the Intracoastal in northern Palm Beach County — across the causeway from a glamorous resort town — he couldn't have known that he would forever cast West Palm Beach as the shabby sibling to the posh streets of Palm Beach Island.

Today, after decades of flux, West Palm Beach is changing for the better, and there are plenty of reasons to visit the city's burgeoning downtown area. From the $30 million Centennial Square waterfront that hosts outdoor concerts and the city's weekend green market to the up-and-coming Dixie Corridor Restaurant Row, there's never been a better time to toast the city.

But it's West Palm Beach's Clematis Street hub that has it all: cocktail bars, gastropubs, mom-and-pops, clubs, and late-night restaurants. It might not be as picturesque as Delray Beach's Atlantic Avenue, or as kitschy-hip as downtown Lake Worth, but what it lacks in glamour and hipster appeal it makes up for in variety. Here is our guide to the emerging nightlife scene in West Palm Beach:

Kapow!
For an early start. Begin your night strolling through the shopping and entertainment plaza formerly known as CityPlace, newly-rebranded as Rosemary Square. From there, hop on the Downtown Trolley that connects the plaza with West Palm Beach's restaurant-lined Clematis Street. Your first stop should be Kapow!, located on the westernmost stretch referred to by locals as the 500 Block. It's best known for its slammin' Kapow-er Hour happy hour. From 11:30 a.m. to 7 p.m. the bar staff will sling the bar's best deal: $5 draft beer, Sapporo, and half-priced wines by the glass. Pair them with small plates, dim sum, and gyoza tacos priced at $5 to $10 with options including truffle oil and parmesan cheese-infused grilled shishito peppers or a trio of ahi tuna poke tacos topped with sesame, avocado, and  dashi vinegar.

For a casual hang. Consider the Blind Monk, located on a quiet side street just west of Rosemary Square and a short walk south of Clematis Street. One-and-a-half blocks south of the station, this restaurant and bar specializes in affordable fine wines, elevated craft beer, gourmet light bites, and artisanal meat and cheese plates. The two-story loft displays a floor-to-ceiling wine cellar, soft elegant lighting, and burlap sac wall paneling. Open until 2 a.m. on the weekends, it doubles as a romantic late-night wine bar.

The Blind Monk
For a quick bite. Head to Palm Beach Brewery and Wine Vault, a large, standalone building where a brewhouse offers a wide array of house drafts. A tiny nook at the front also pays homage to the owner's private label collection of wine. A wood-burning oven churns out pizzas and similarly satisfying fare that goes perfectly with both. Umbrella-shaded outdoor picnic tables provide the final beer garden touch, giving it all the trappings of a friendly brewpub, from the beer and wine flights to the popular trivia night and cornhole.

For a formal dinner. There are so many dining options — we've already highlighted the ten best in West Palm Beach — but for a night out on the town you want to graze. For that, try Tapeo (a Spanish term for a tapas crawl) located in a two-story, waterfront space at the far east end of Clematis Street. Here, the chef shares his Spanish roots through recipes designed to spirit you off to the streets of Madrid. Sip on wine and sample from more than 30 small plates ranging from tablas (chacuterie and cheese platters) to classics like boquerones (white anchovies), Jamón Iberico (imported Spanish ham), or patatas bravas (crispy potatoes served with a spicy sauce). For family-style dining, sample any of the traditional, Valencian-inspired paellas featuring both meat and seafood, or a vegetable-only take.

Ates Isildak
For a party. Look no further than Pawnshop, a boutique nightclub located just five blocks east of the city's Brightline station. The hotspot fuses kitsch with class thanks to a full-sized, psychedelic '60s-era bus that doubles as a cocktail lounge. An original 727 jet with '70s-style airline chairs makes for a funky lounge. Across the street, Camelot — a posh John F. Kennedy Cape Cod beach house-themed club — has become a favorite among Palm Beachers looking to take a walk on the wild side. It's semi-private, so getting in requires a little finesse. Once you're in, however, enjoy the upscale bar and lounge that features a raw bar serving New England seafood. Then, pop a bottle of bubbly and people-watch from the bow of the whimsical, imaginary sailboat inside.

For a dive situation. O'Shea's Irish Pub fits the bill with its affordable drink specials and late-night hours. Chow down on potato skins served O'Shea-style, stuffed with breaded and fried chicken topped with barbecue sauce. Or try the savory Irish sausage roll encased in a golden pastry and served with honey mustard. Both are perfect for soaking up the liquor you'll feel compelled to down here, apiece all day on Friday. $3 mimosas, bellinis, and $10 unlimited bloody mary’s are available during the Saturday and Sunday brunches. 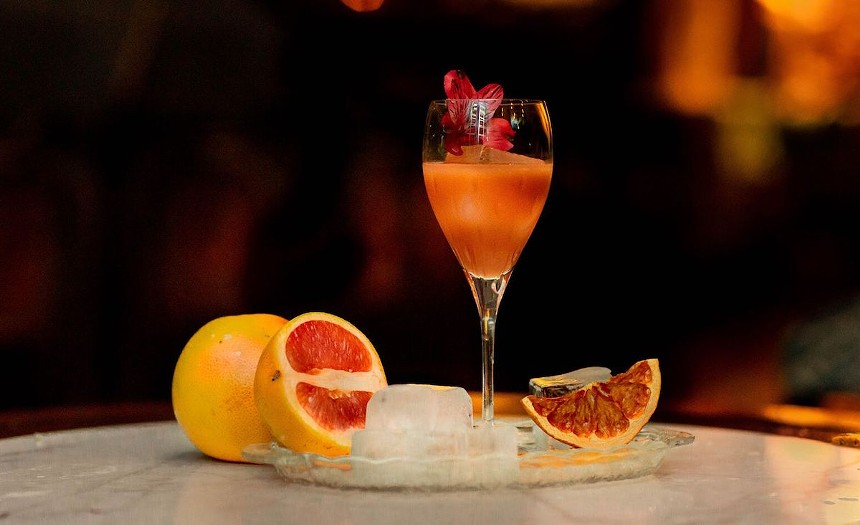 Kenneth Smith
For live music. If you're looking for a good show, there's no better place than Respectable Street. Located at the start of the 500 block, this live music spot is not only one of the city's — but also one of the county's — longest-running live music venues. It first opened in 1987 and remains among the city's oldest watering holes. It's kind of dark and dingy at this point — the place has hosted over 1,000 live acts — but that's part of the allure. Doors open at 9 p.m. for most shows, but the fun doesn't really get started until much later, and doors close at 3 a.m. Expect to find off-beat acts and discover new music. Owner and music lover, Rodney Mayo of Subculture Restaurant Group, still has a hand in deciding who takes the stage, so it's a well-curated list of up-and-coming artists. Once-unknown acts such as the Misfits, the Red Hot Chili Peppers, and the Damned made early appearances here.

For a slinky jazz vibe. Head next door to Voltaire. Up a narrow flight of stairs, you'll find one of the city's coolest lounges. Like any good cocktail bar, this stylish venue has a strong speakeasy vibe. Named after and inspired by the 18th-century writer and philosopher of the same name, the spot is an ode to those who advocate for freedom of expression. Feel free to do just that with a drink or two in hand. The unique, multi-dimensional concept features a library of libations and spirits, including a varied selection of absinthe. Hungry after all of that creative loafing? In-house Yellow Jack Sushi provides some truly beautiful sushi offerings (and a ton of sake) for all your late-night noshing needs.
KEEP NEW TIMES BROWARD-PALM BEACH FREE... Since we started New Times Broward-Palm Beach, it has been defined as the free, independent voice of South Florida, and we'd like to keep it that way. With local media under siege, it's more important than ever for us to rally support behind funding our local journalism. You can help by participating in our "I Support" program, allowing us to keep offering readers access to our incisive coverage of local news, food and culture with no paywalls.
Make a one-time donation today for as little as $1.