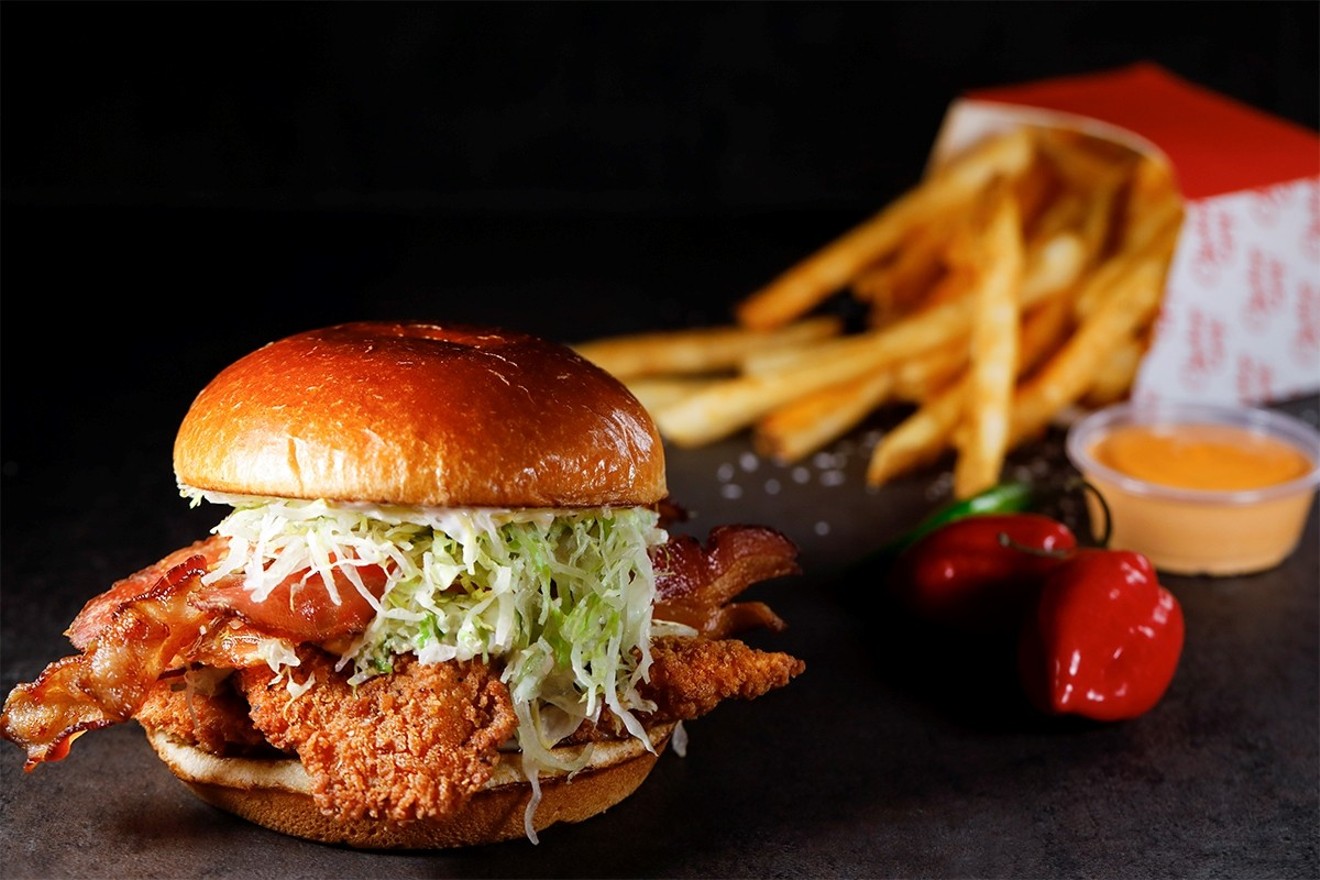 Chicken sandwiches are a hot topic these days, with national news outlets making much ado over the Popeyes versus Chick-fil-A sandwich debate.

Guy Fieri is poised to swoop down and claim the chicken sandwich prize when Chicken Guy opens at Aventura Mall. The eatery could debut as soon as this weekend; however, a definitive date has not yet been announced.

The restaurant, a partnership between the Food Network celebrity chef and Robert Earl, CEO and founder of Planet Hollywood, takes aim at the fast-casual chicken market through a menu that offers chicken tenders, chicken sandwiches, and sides, along with a choice of 22 sauces for dipping and slathering.

What makes this place unique, however, is how the chicken is prepared. Each piece is brined in a bath of lemon juice, pickle juice, and buttermilk. Fieri says there are two schools of thought when it comes to making fried chicken. "There are chefs that brine and chefs that don't — in much the same way that some bands have electric guitars and some have acoustic." Favoring a brining technique, Fieri says it took two years to develop the right recipe. "We spent a lot of time digging through how much pickle juice we put into the brine and where we get the chicken from." The chicken, by the way, is all-natural, antibiotic-free, never frozen, hand-pounded, and breaded fresh daily.

Fieri also says the 22 sauces — ranging from tangy peri peri to sweet bourbon barbecue — are made from scratch. Though his taste leans toward spicier styles such as Nashville hot honey, he says everyone will find their favorite sauce. In fact, Chicken Guy will employ a "sauce slinger" to walk around with ten sauces for guests to sample. "I'm telling you, this shit is legit. We want people to discover their favorite sauce."

Guy Fieri at Chicken Guy.
Photo courtesy of Chicken Guy
Chicken Guy's chicken, Fieri says, is something unique and delicious. "It's my passion project, and it's kicking ass."

The celebrity chef describes the scene of a typical day at the original Chicken Guy location, which recently opened in Disney Springs at the Walt Disney World Resort: "There's a line every day for Chicken Guy. The proof is in the chicken, the sauce, and the style. We're excited."

Fieri, who has an affinity for the Magic City, won't be at the Aventura grand opening Friday, but he plans to visit in the next month or so. "I have a strong connection to Miami. People there love food and they love having fun." The chef says he's especially excited to open a Miami-area restaurant so that when the South Beach Wine & Food Festival rolls around in February 2020, he'll already have roots planted here.

The chef also has a few favorite restaurants he visits while in town. "When I'm in Miami, I visit Sakaya Kitchen and Blackbrick. Richard [Hales] has got it going on."

Fieri also doesn't rule out opening other projects in Miami. "Maybe this will be what opens the door to opportunities. Miami treats me so well. I have great friends there, and I love the water, the music, and the people."

So will Chicken Guy's Bourbon Brown Sugar BBQ chicken sandwich ($6.99) crush the competition? Fieri thinks his sandwich is something to crow about, but he'll let customers speak for themselves. "I think the citizens of Flavortown are going to write us in on the ballot."

Chicken Guy Aventura Mall. 19501 Biscayne Blvd., Aventura; chickenguy.com. Monday through Saturday 10 a.m. to 9:30 p.m.; Sunday noon to 8 p.m.
KEEP NEW TIMES BROWARD-PALM BEACH FREE... Since we started New Times Broward-Palm Beach, it has been defined as the free, independent voice of South Florida, and we'd like to keep it that way. With local media under siege, it's more important than ever for us to rally support behind funding our local journalism. You can help by participating in our "I Support" program, allowing us to keep offering readers access to our incisive coverage of local news, food and culture with no paywalls.
Make a one-time donation today for as little as $1.