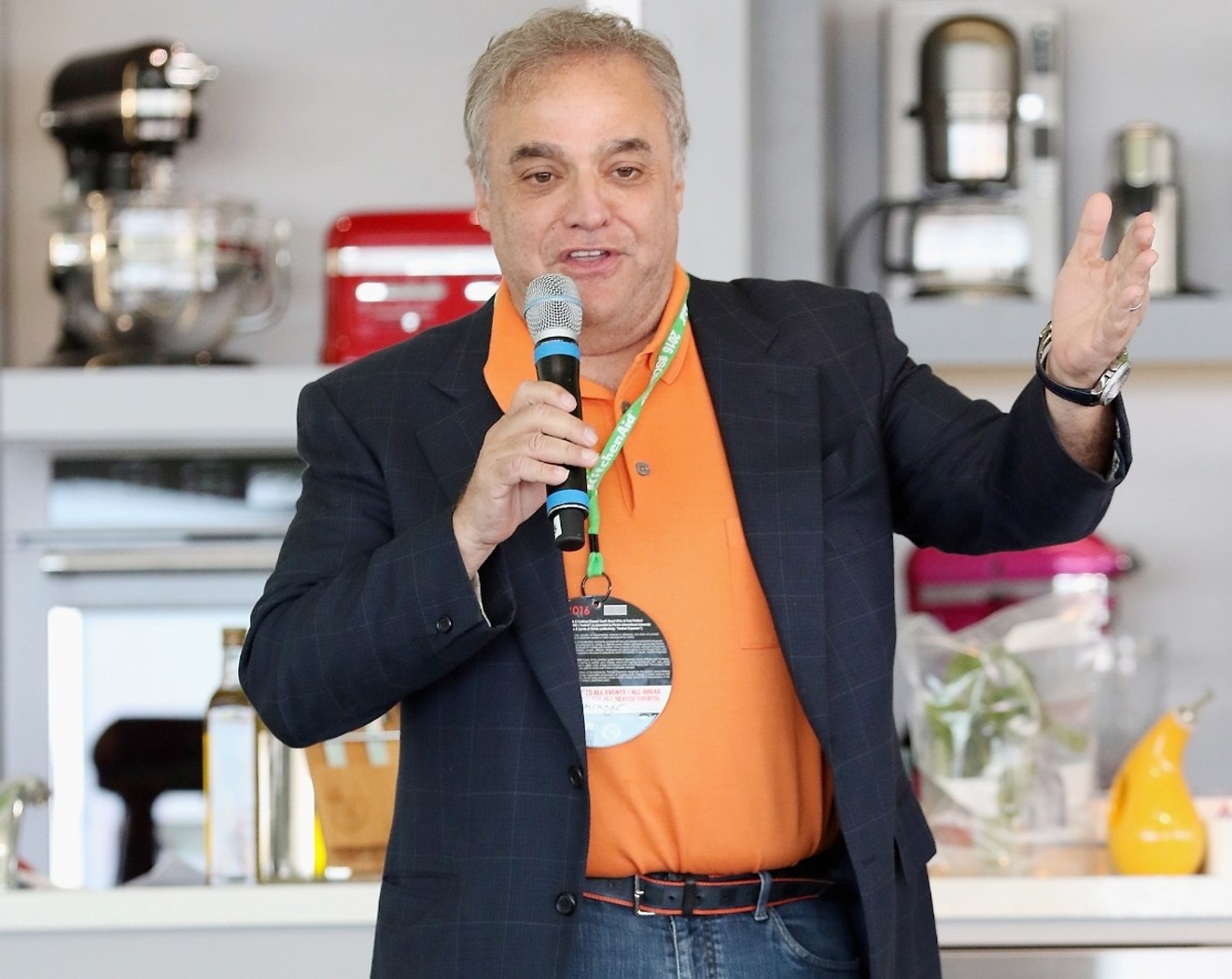 South Beach Wine & Food Festival founder Lee Schrager. Photo courtesy of SOBEWFF
It's an overcast day on South Beach. After a sudden sun shower, sunbathers are slowly returning to the sand, skirting a fenced-in area the size of two football fields. On the still-damp sand, workers are erecting the main section of what will become the north stage of the South Beach Wine & Food Festival (SOBEWFF), where signature events like the Burger Bash will take place.

Even though the party hasn't begun, you can't get in unless you fill out a questionnaire, provided by a health-screening company called SymCheck, which you access on your phone via a QR code. After answering a few basic questions (including whether you're experiencing COVID symptoms, whether you've traveled outside the country, and whether you're vaccinated), the app creates another QR code, which is scanned.

Only then can you enter the festival grounds.

Devin Padgett, managing director for the festival, says that every person who attends any of the 70 SOBEWFF events this year will go through this process. That includes volunteers, staff, and chefs. And ticketholders.

A few months ago, festival founder Lee Brian Schrager announced that the festival would require proof of a negative COVID test or vaccine, but organizers had to scrap that plan after Florida Gov. Ron DeSantis signed legislation on May 3 that bans "vaccine passports".

Schrager confided to New Times that it "wasn't worth fighting with the governor." And, although Schrager admits that the SymCheck system is based on trust — i.e., that festivalgoers will tell the truth — other safeguards are in play.

For one, everyone will be temperature-scanned before entering. The festival has also reduced the number of tickets sold for each event and divided marquee parties like the Grand Tasting Village, Burger Bash, Best of the Best, and Bubble Q into two sessions apiece. Between sessions, each event space will be cleaned and sanitized.

Padgett says the festival's COVID plan, designed in cooperation with the City of Miami Beach and Florida International University, is as fine-tuned as it can be.

"Unlike a lot of Floridians, we're taking our COVID precautions seriously," he says. "Our commitment to safety is solid."

Padgett concedes there's a balance between allowing festival guests to enjoy themselves safely and going overboard. He says the festival will encourage what he calls "avoiding close contact" as opposed to mandating six feet of social-distancing. "If you're not in your pod with your friends, we're asking you to spread out. But we're not going to make anyone uncomfortable," he explains.

(New Times checked back with Padgett late last week after the CDC advised that people who are fully vaccinated can resume most indoor and outdoor activities without wearing a mask or physically distancing. Padgett responded that the festival is proceeding as planned. "We're sticking to our guns," the SOBEWFF director added.)

Though the festival is likely to look much the same to ticketholders, Padgett points out subtle differences as he walks through the site. For one, there will be slightly fewer chef stations at each event, allowing for more distance between each one. "We wanted the same-size venues. We wanted the same airspace but with less people," Padgett says of the iconic event spaces, each of which is roughly the size of two football fields.

There will also be added seating for events, and directional signs to keep a consistent traffic flow. To put it another way: It's going to be more difficult to grab seconds of that Morimoto burger. Additionally, bars at the main tented events will be serviced from only two sides — east and west.

The festival, which is usually held in February, ran into some difficulties due to the date change. The Grand Tasting Village, usually staged along Ocean Drive between 10th and 14th streets, was moved south of 10th Street because of the Air and Sea Show the following week. Planning a mostly outdoor event in May in Miami Beach also meant considering rain contingencies. Also sea turtles.

This year's SOBEWFF will take place in the middle of nesting season, which runs from April to October. In order to acquire a permit for the event, Schrager had to hire a sea-turtle expediter to make sure no nests were disturbed during the erection of the festival site.

"It cost $30,000 for the expediter," Schrager says. Though he's quick to note that he loves sea turtles, he adds, "It felt like one of the ten Passover plagues while we were planning everything."

Schrager stresses that it was vital that the festival go on this year — even if it must take place on a smaller scale. The events, whittled down this year from 120 to 70, are still important to Miami Beach and to the SOBEWFF's benefactor, Florida International University's Chaplin School of Hospitality & Tourism Management.

Says Schrager: "We created this festival to raise funds and awareness for the Chaplin School. It's also a way to spotlight Miami restaurants in a good light."

On that note, for the first time ever, the festival is paying local restaurants for their participation. The stipend varies according to the event, but Schrager says it ranges between $400 to 600 per event.

"It's a very small amount, but it's better than nothing," he adds.

He says he was surprised at the number of Miami restaurants that accepted the invitation to participate in spite of the past year of hardships.

"This year we wanted to focus on smaller restaurants and it was actually shocking how many said yes."

At the same time, he says, some large companies that would normally sponsor the festival had to pass this year because corporate policies didn't allow employees to travel. "We just hope to see them in 2022," says the festival founder.

Familiar faces like Alex Guarnaschelli, Bobby Flay, and Guy Fieri will be present, but the usual autograph signings and meet-and-greets are out this year.

That said, Schrager believes visitors might actually have a better experience this year than in years prior owing to the presence of fewer attendees at marquee events like the Burger Bash. "We added seating and the lines will be gone," he says. "If I were a consumer and I felt comfortable going out, this is the time I would buy a ticket."

Though ticket sales have been brisk — "The small and mid-sized events are almost all sold out," says Schrager — the larger events like Grand Tasting Village and Burger Bash still have tickets available. "They've been slower compared to other years, but I feel like people are out of the groove of buying tickets," Schrager theorizes.

Regardless of whether the festival sells out, Schrager feels it was important to not skip this year — which also happens to coincide with SOBEWFF's 20th anniversary. "I don't know if there would be a 21st festival if we didn't have this 20th anniversary celebration," he confides.

"This might not be the way I dreamed the 20th anniversary would be, but we're still honoring the people we want to honor. We may get some great takeaways," he goes on, reflecting that perhaps the disruption will result in a return of sorts to the festival's roots. "Maybe we lost our direction. Maybe we were victims of our own success," he says.

At any rate, he's happy with the knowledge that the festival will go on. "Celebrating 20 years of anything is something to be recognized. We want people to be safe and happy."

SOBEWFF is the first major, multiday food festival to be held post-pandemic. If Schrager and crew can pull it off without incident, it is likely to serve as a blueprint for subsequent events like the Aspen Food & Wine Classic, which was postponed to September this year.

Managing director Devin Padgett is convinced that, while there may be some hiccups along the way, a safe and satisfying time will be had by all.

"Keeping the vibe of the festival alive and shining a positive spotlight on Miami's culinary scene is so important. Someone had to go first and it's going to be all eyes on Miami," he says. "Hopefully, on Sunday night, when the last event ends, people will walk away glad that they came."

The South Beach Wine & Food Festival. May 20-23 at various locations. Tickets cost $15 to $600 via sobewff.org.
KEEP NEW TIMES BROWARD-PALM BEACH FREE... Since we started New Times Broward-Palm Beach, it has been defined as the free, independent voice of South Florida, and we'd like to keep it that way. With local media under siege, it's more important than ever for us to rally support behind funding our local journalism. You can help by participating in our "I Support" program, allowing us to keep offering readers access to our incisive coverage of local news, food and culture with no paywalls.
Make a one-time donation today for as little as $1.