As the number of microbreweries across the tri-county area continues to grow, both existing and in-planning craft beer businesses say they're looking for new ways to stay relevant in a growing marketplace. Although several South Florida breweries have been serving food from on-premise kitchens for years, an increasing number of microbreweries have recently announced plans to do the same.

Currently, over a half-dozen microbreweries are looking to incorporate permanent food options into their business plan, a move that will officially categorize many as brewpubs. The Brewers Association (BA), the nonprofit trade association dedicated to small and independent brewers, currently lists seven South Florida breweries as brewpubs, defined as an establishment that sells both food and beer produced on-premise.

"We want the approach to the food to mirror our approach to beer — always changing," Halker says. "That's the culinary agility we're really into."

Earlier this year, Palm Beach Brewery & Wine Vault became the first Palm Beach County brewery to open with an on-site kitchen. Owner John Pankauski says he didn't plan on opening a restaurant, but was encouraged by numerous people to include food as part of his business plan. Today, the brewery's wood-burning oven produces a variety of dishes including oven-roasted chicken wings, prosciutto-wrapped asparagus, homemade focaccia bread, and thin-crust pizza made with locally-sourced ingredients.

"If you'd told me before I opened that food revenue would be equal to my beer revenue, I wouldn't have believed you," Pankauski says. "On a monthly basis, our food accounts for approximately 30 to 40 percent of our gross revenue. To me, that's a testament to how important quality food can be for a craft brewery."

MIA Beer Company had similar beginnings when it opened in January 2015. Although he originally planned to serve only beer, the Doral taproom was required by law to serve food, says MIA owner Eddie Leon. 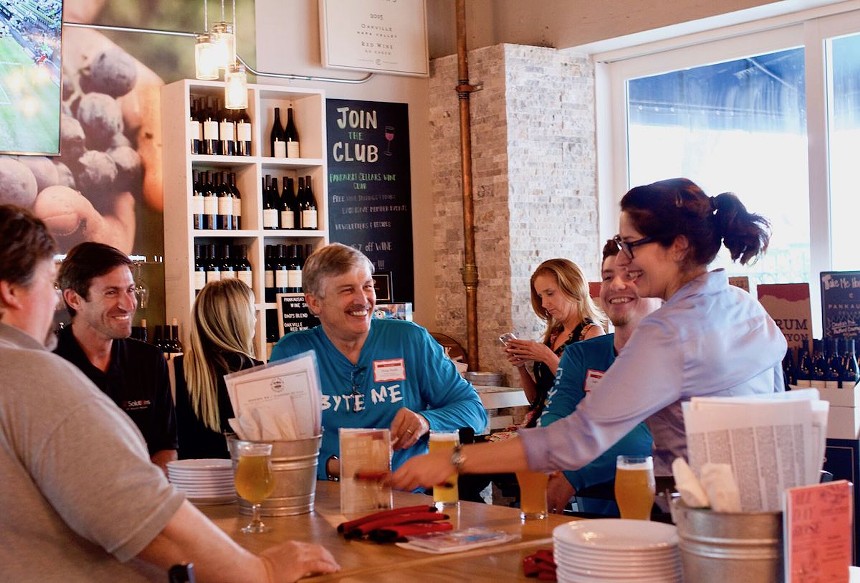 Palm Beach Brewery & Wine Vault is currently the only operating Palm Beach County brewpub.
Photo by Jax Streng
After two months of catering food for taproom guests, MIA purchased a food trailer. It operated until July 2017, when the city of Doral notified the brewery it could no longer use a truck to serve food. Today, the brewery sells food from its on-premise kitchen, Bruhaus & Grill, run by Pepito's Plaza.

"Food sales have become a big part of our taproom model," says Leon. "They make up 35 to 40 percent of our current sales. It helps tremendously to allow our patrons to stay with us and continue drinking. Some people visit just for the food. Looking back, we realize that it had a huge positive impact on our business."

In February, Fort Lauderdale's Tarpon River Brewing opened its doors as a brewpub. The menu offers a full range of dining options from breakfast starting at 8 a.m., to vegan-friendly hummus and salads, or pub-style eats like banger sausages, burgers, and flatbread pizza.

"Do all breweries require restaurants? I don't think so," says Tarpon River Julian Siegel. "We have plenty of amazing breweries making great beer, but they don't serve food. For us, it's what we do. Our food sales are 45 percent at the brewery. People come for the beer, and stay for the food."

Additionally, Miami's Tank Brewing will move from using its own onsite food truck, Twisted Fork Kitchen, to launching a 1,000-square-foot, on-premise kitchen that will focus on more chef-driven dishes. The idea is to offer a larger selection for the guests that visit the 8,000-square-foot taproom, offering their own take on "country industrial" fare that incorporates elements of comfort food and the beer making process.

An increasing number of formerly-established microbreweries are also making a move to include full-time dining options.

Funky Buddha Brewery was among the first South Florida breweries to open with an in-house kitchen.
Courtesy of Funky Buddha Brewery
In Palm Beach County, Delray Beach's Saltwater Brewery has plans to work with a food truck that will launch later this year. One of Saltwater's founder's passion projects, the truck will specialize in offering a rotating selection of favorite dishes from now-defunct Delray Beach establishments, says the head of operations Dustin Jeffers.

"We'll still rotate trucks throughout the week, but this food truck will serve guests during lunch hours, and as a back-up option for trucks that cancel last minute," Jeffers says. "Having food during non-peak days and hours will help bring people in, and — we hope — keep people longer."

"When I get phone calls from aspiring brewery owners, I tell them not to overlook the food component," Pankauski says. "Our job is to create a unique craft experience. Every other brewery sells beer and wine, but you want to give your patrons a unique experience they can't get anywhere else. Food has became an important part of that mission."
KEEP NEW TIMES BROWARD-PALM BEACH FREE... Since we started New Times Broward-Palm Beach, it has been defined as the free, independent voice of South Florida, and we'd like to keep it that way. With local media under siege, it's more important than ever for us to rally support behind funding our local journalism. You can help by participating in our "I Support" program, allowing us to keep offering readers access to our incisive coverage of local news, food and culture with no paywalls.
Make a one-time donation today for as little as $1.