Time flies when you're having tzimmes. This sibling to Miami's Rascal House celebrated its fifth anniversary this year, and Boca-ites couldn't be happier that the doyenne is still dishing up the cholent, brisket, matzo balls, and babka. Unless, of course, they've decided to sup on some corned beef-and-pastrami sandwiches, which are overstuffed enough to provide a second meal the next day. Throw some half-sour pickles and onion-pumpernickel rolls into the doggie bag and you've got tradition as well as value -- the very definition of a top-notch deli.

Remember how exciting going to the Melting Pot used to be? No? Hmm... well, fondue isn't exactly the most exciting food, especially for a meal that leaves your pockets empty. In the heart of Delray's Pineapple Grove sits Fásha, a hip, classy joint that wants you to know fondue isn't boring. Its menu includes fancy cheese fondues for any palate, from wild mushroom to Caribbean habanero chile. For the main course, dive into a delicious helping of mahi-mahi or chicken breast with mango dipping sauce. And for dessert, enjoy bananas and chocolate or a toke of apple-cinnamon flavored tobacco from a hookah. (Yes, you read that right.) Fondue just got a bit more exciting. Dip, baby, dip.

From 11:30 a.m. to 3 p.m. every weekday, you can stroll into the Cheetah Room, sit down, and choose from a full menu of food. That's right, they got steak, pasta, pizza, and appetizers all for the taking. It's free, but alas, there is a catch: You have to watch beautiful women dance naked on the stage. We are willing to make that sacrifice, however, as much as it upsets us, just to be able to say that there really is such a thing as a free lunch. 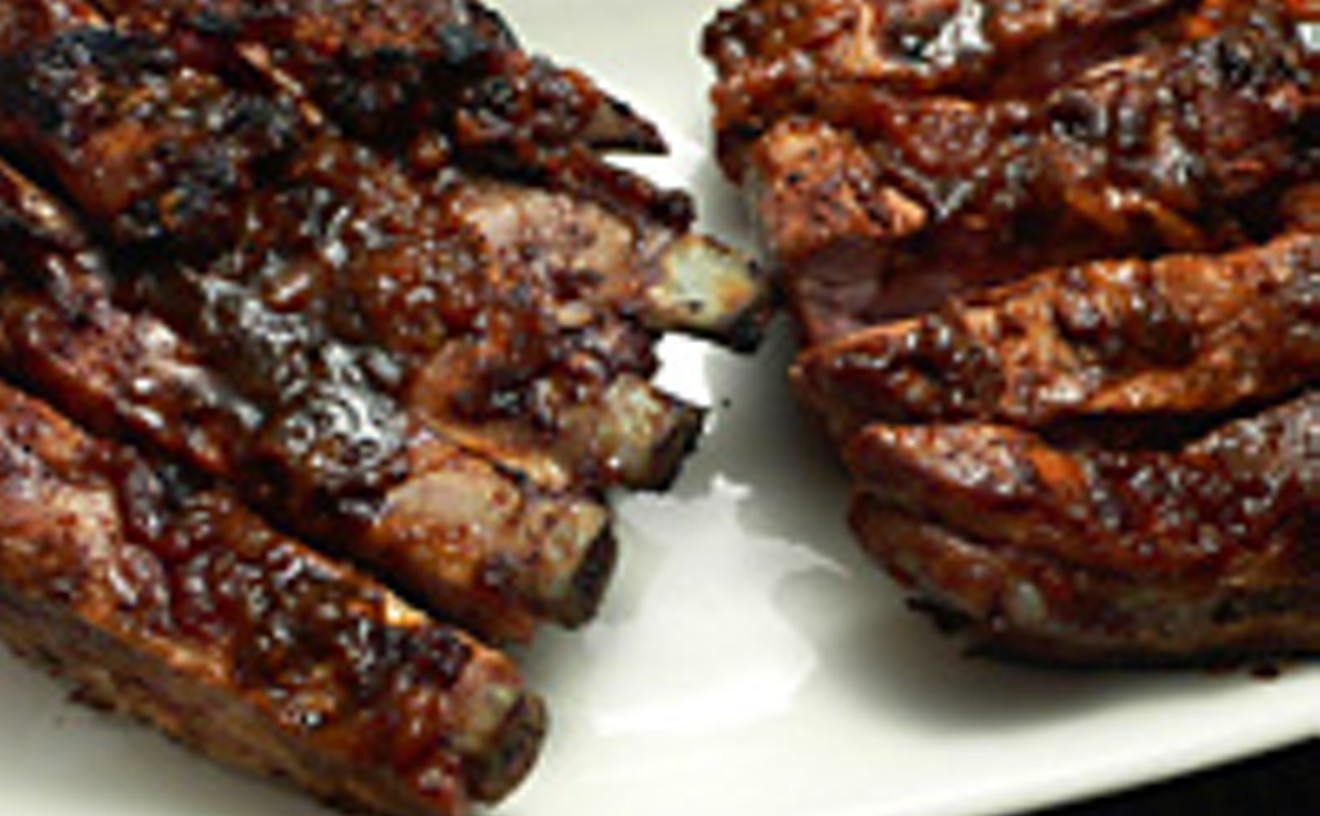 Buffalo aren't endangered anymore -- they got ranches full of them out West. And their meat is not only tender and tasty but it's also good for you. Seriously. The American Heart Association has buffalo on its list of "Heart Healthy Foods" list. Why? Because it's tofu compared to beef, having 70 percent less fat, 30 percent more protein, and half the cholesterol. Bison is the other red meat -- and at Ernie's, you get a delicious burger, along with the requisite fries and slaw, for just $7.25. If you don't yearn for buffalo, eat something else. With a slogan like "Where conch is king, barbecue is a way of life, and the bar is open late," you can't go wrong at Ernie's, a long-time staple in the area.

If you're the type who's up with the early birds, sunrises aren't the only breathtaking vision to behold. This friendly eatery offers up two eggs, potatoes, and toast for $1.69, Monday through Friday, or for $2.10 on weekends. For the heartier cheapskates among us, turn it up a notch with two eggs, two strips of bacon or links of sausage, and two pancakes for $2.99 on weekdays, $3.40 on Saturday and Sunday. Offer to buy breakfast for a couple of friends here and you'll still get change back from a ten spot. Of course, if you want to indulge your frugal pleasures by your lonesome, you can take a seat at the counter. Sure beats dining on that early worm.

Once upon a time, a young man named Sindbad was wandering through the Everglades, lost and famished. Near collapse, he happened upon a tin can. He rubbed it to see if there was perchance food within, and suddenly the top popped off, smoke billowed forth, and a genie appeared. "I'll grant you one wish for setting me free," the genie intoned. "Falafel," the starving man croaked. Poof! Sindbad instantly found himself seated at Sawaf's, a plate before him crowded with 12 falafel, which, for the genie-less, costs $4.99. They were sorely large and of a deep golden brown. He bit into one and discovered it to be crunchy on the outside, moist and spicy on the inside. Just then, a waiter placed before him tahini, pita bread, and a heaping plate of olives and green peppers. "From the genie?" Sindbad inquired. "No," the waiter replied, "we always include these with an order of falafel." 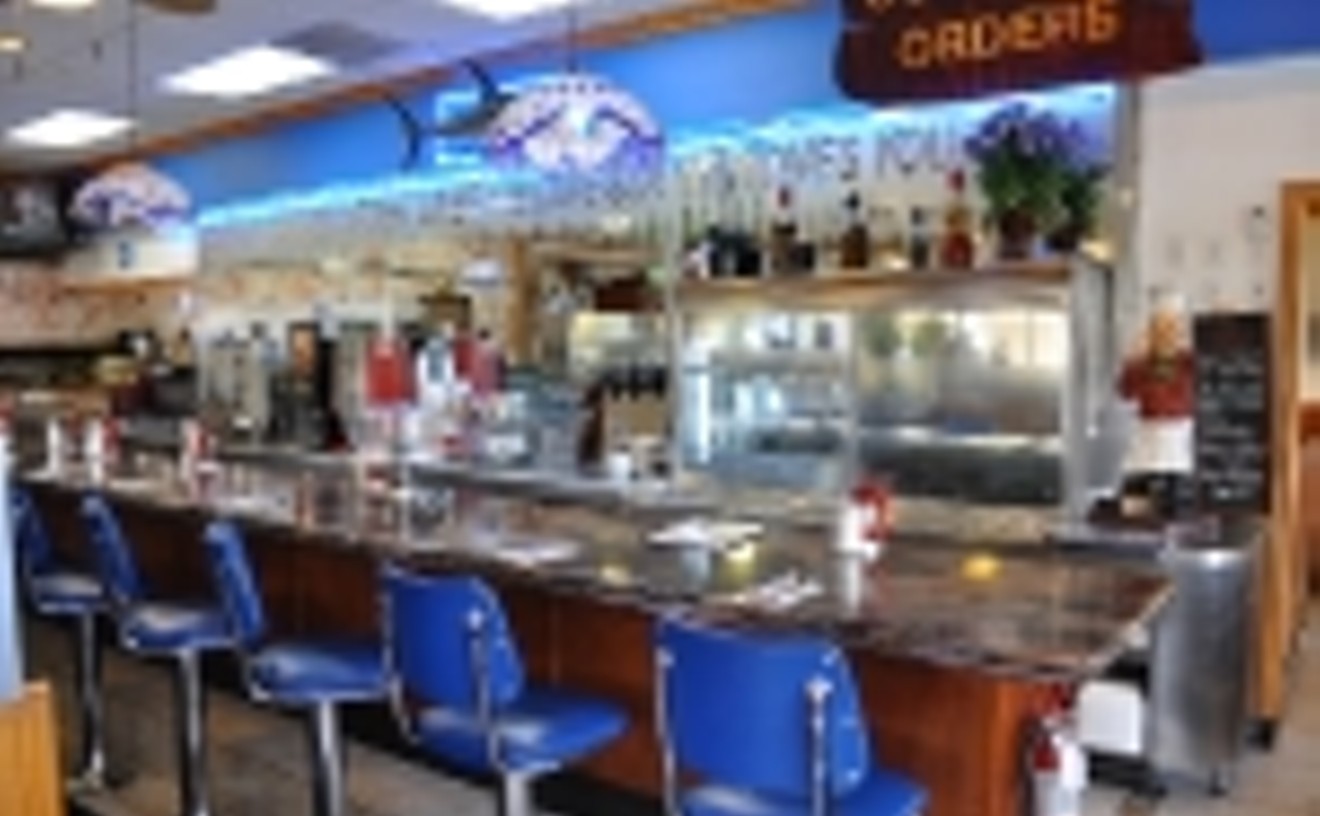 Slow night at the diner this Monday night. So John Wilson, the middle-aged, wiry fellow who handles the counter, is taking care of a few chores. He's atop the back counter, straddling an espresso machine and soft-drink dispenser, vigorously wiping the expansive wall mirror. He's using coffee filters to swab, pages from the Sun-Sentinel to dry. He hops down, takes an order for a bowl of homemade chili, and hustles away to another task. "You folks don't look like smokers," jokes a nearby waiter to four elderly men and women who've plunked down in the heart of the smoking section. They remain, and the two women soon light up. The chili arrives. It's thick. So viscous, in fact, it heaps. Slightly sweet in the first spoonful. A mounting spicy heat builds with each new bite. The beef is finely ground, the red beans firm and flavorful. "More iced tea?" Wilson asks. Indecision. "Hey, as long as you're not driving..." he says as he whisks the glass away for a refill.

Best Bread in a Basket

A walk down Fort Lauderdale Beach may yield a variety of smells -- some good, some not so good. But just try to walk past Aruba Beach Cafe and ignore the smell of fresh-baked bread wafting through breezy open windows. The Bimini Bread here is served in half and whole loaves, coated with a mouth-watering Aruba honey glaze and served with whipped honey butter. The whole loaf is a meal in itself, so if you're looking to feast on an entre as well, be warned: All your energy may be spent licking your fingers. 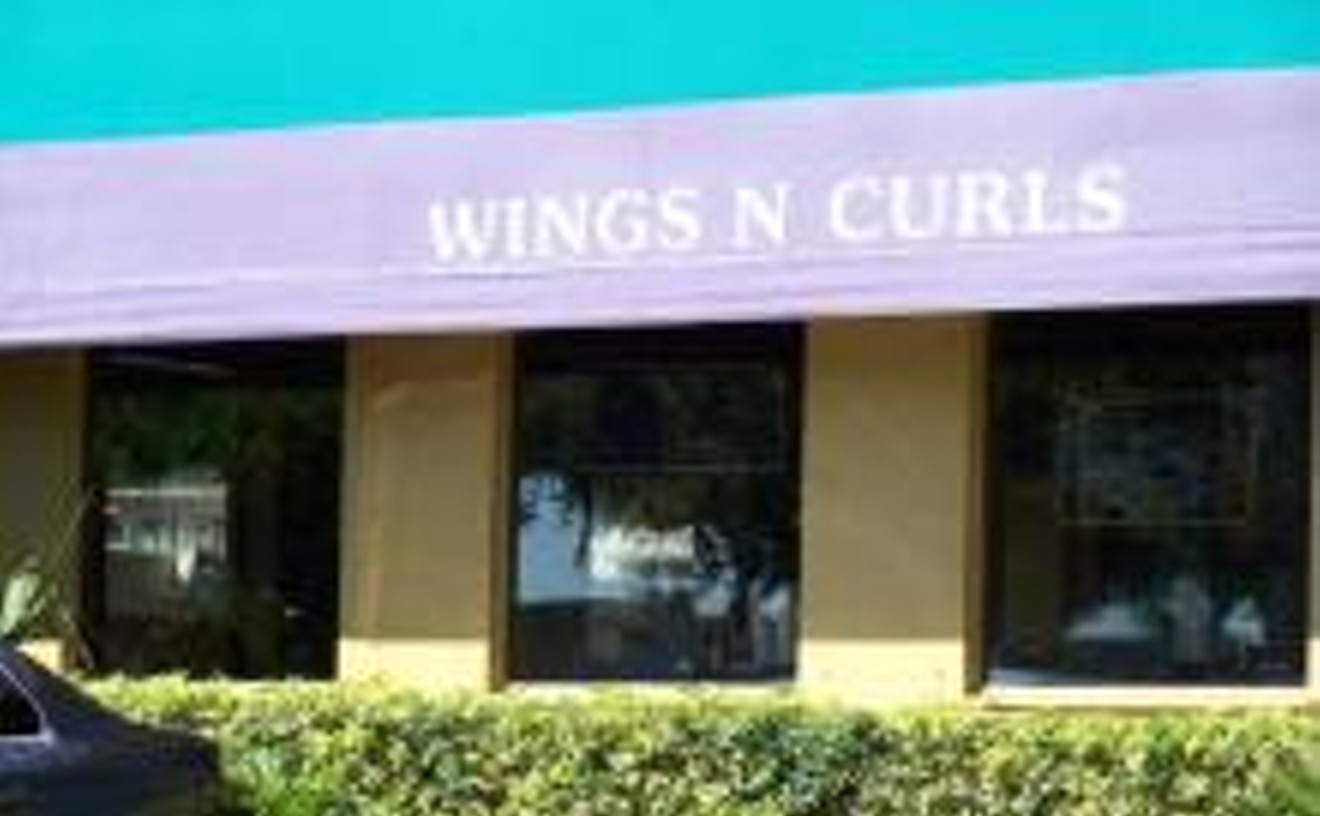 There's no polite way to eat ribs. Knife and fork just don't get at those narrow, grainy slices of pork, and it wouldn't be any fun if they did. But you don't want a rib that has to be gnashed into submission. Too much tearing at the bone and next thing you know, the barbecue sauce is all over your face and dripping down the front of your shirt and your jaw muscles are getting tired. For $13.95, Wings N Curls gives you a full rack of St. Louis pork baby backs that are heavy with tender meat and easy on your clothes and your mandibles. The juicy pork, enough for two diners with fairly big appetites, has just enough staying power to cling tenaciously to the bone while you gnaw your way through it. The barbecue has a fine, dark, smoky flavor (the recipe is proprietary, of course), no cloying sweetness there, making it a meat-eating experience for adults. The restaurant is a basic tables-and-chairs sort of place, with no-nonsense waitresses who cart the food in efficiently. For the full experience, go on karaoke Monday night, when diners can get up and sing Hank Williams or Patti Page songs.

A caesar salad by any other name smells as pungent, peppery, and Parmesan-y, right? Well, not always. That's why we rely on this catering and carryout luncheonette for a satisfying caesar that revolves around crisp romaine, fresh garlic, a smidge of anchovy, and a perfect smattering of Parmesan. You can get this baby topped with grilled chicken for an extra buck, and given the courtesy and customer service extended to everyone who walks through the door -- or calls on the phone to have lunch delivered -- you can also request a scoop of the homemade chicken or tuna salad on top. Not to mention a host of salad "extras" ranging from Portobello mushrooms to roasted peppers to sun-dried tomatoes, that Delicaseas will toss onto a sandwich or any other salad should you desire. But our favorite is a recently discovered combo that adds a bit of salt and spice: Delicaseas' homemade crab cakes, which are breaded and fried to a crunchy golden brown. Try this on top of the traditional caesar and you'll be well and truly hooked.