Instead of grabbing the same old Starbucks croissant, pop into Barbara Young Bake Shop for a slice of homemade heaven. Barbara Young, a 35-year pastry chef, opted out of retirement to open her dream bakery on the Las Olas strip in 2010. The interior has a traditional Americana-meets-retro look, giving it a welcoming feel. When you walk in, the savory aroma of freshly baked goodies and brewing coffee will call out to your taste buds. The counter is lined with tempting delights just waiting to be devoured, including flavorful muffins that are as big as your head. One bite is guaranteed to start the day off right. In addition to the specialty breads and pies, Barbara's signature cheesecakes are not to be ignored. 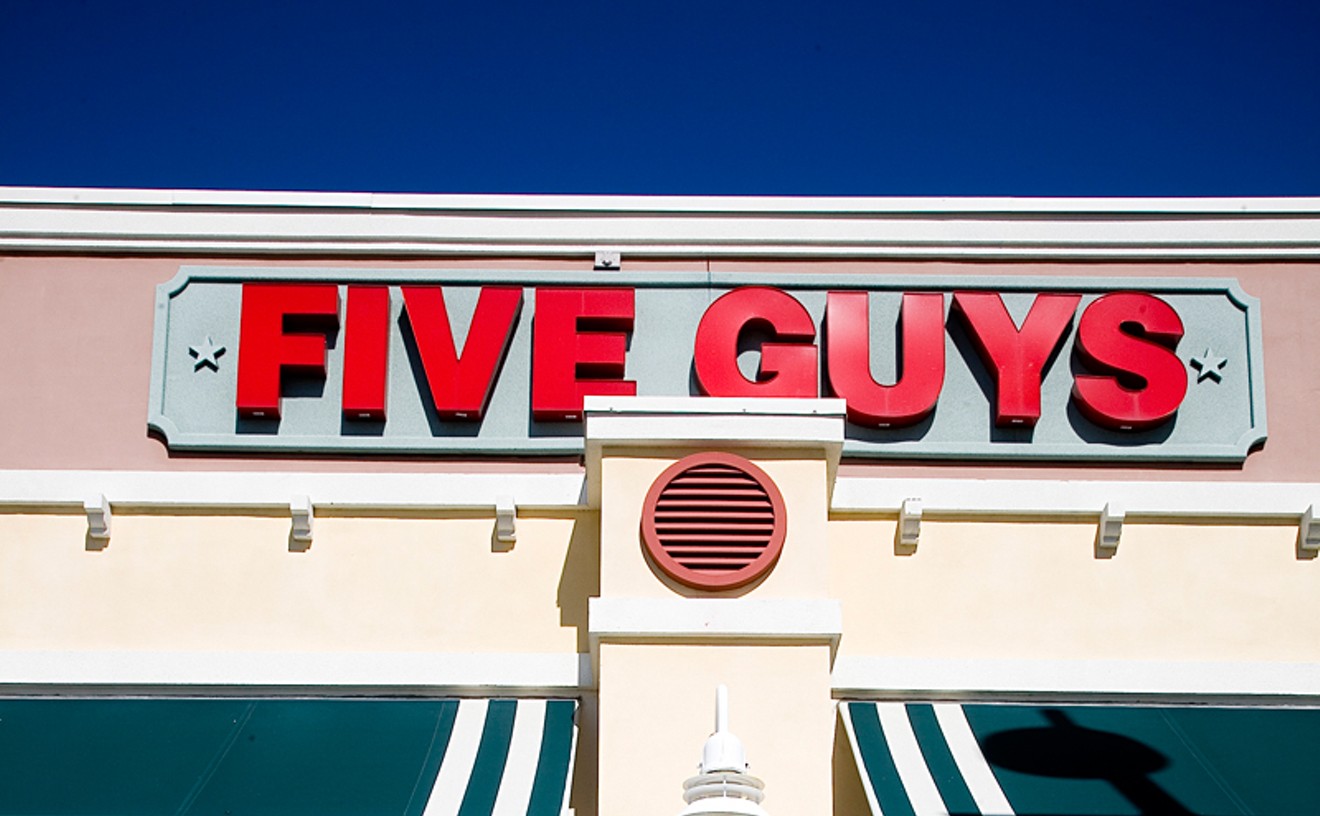 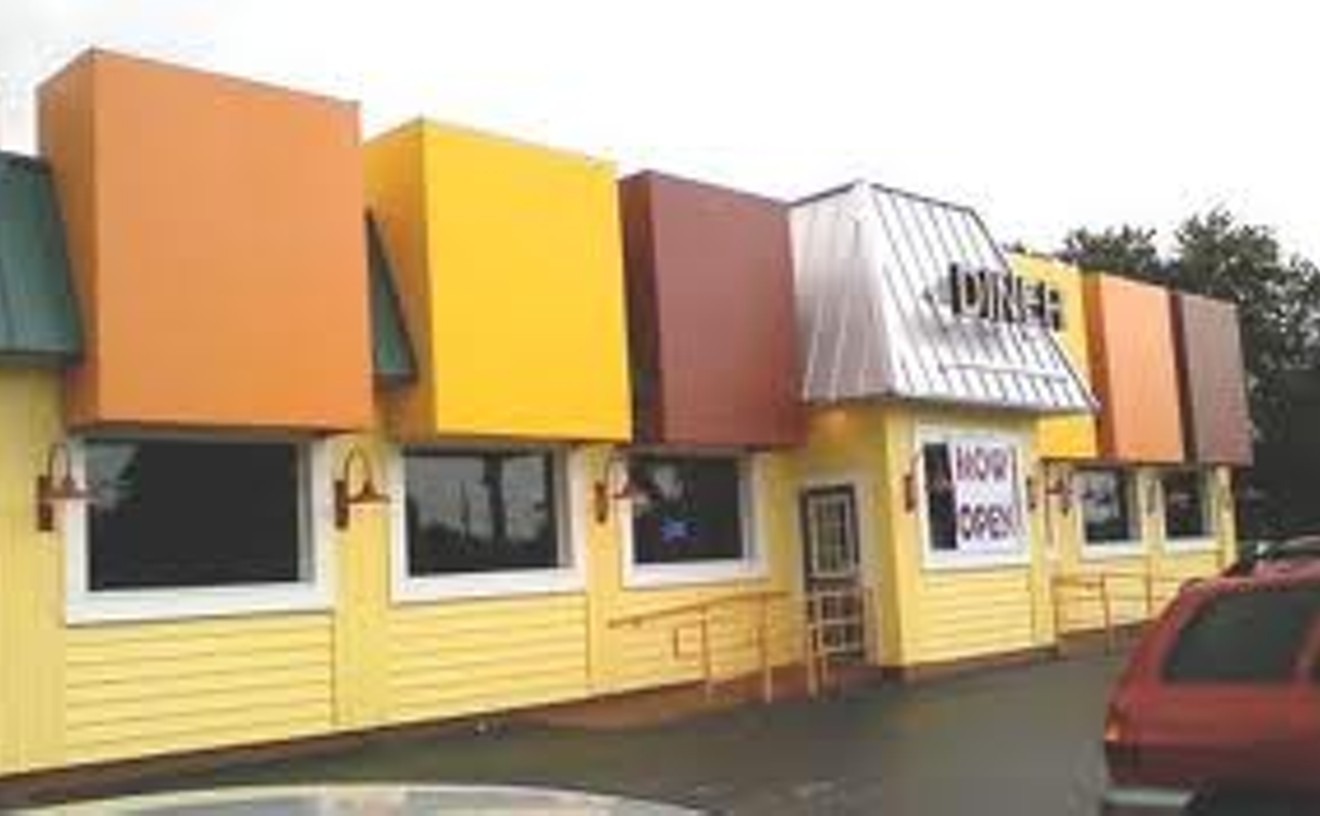 Late-night eats or anytime treats... Oakland Park's Diner 24 knows what diner lovers desire — all things greasy, hearty, and home-style. And what's better than a filling portion of good, ol'-fashioned French fries smothered in a symphony of glistening beef gravy and creamy mozzarella cheese? A second portion of them! These fries, most likely invented during an inebriated moment of genius, will have you performing the night fever hustle in celebration. (Insider tip: Since some diners didn't know what "disco fries" meant, the menu was changed to list only "gravy fries." But if you ask for disco fries, you'll get 'em.)

At Sugar Rush, the four-wheeled version of Miami's Sweetness Bake Shop, you can have your cake and drink it too. The dessert-oriented food truck hocks tasty sweets in Miami-Dade and Broward counties. And one of its signature frozen treats is something called a cake 'n' shake. It's essentially a vanilla or chocolate milk shake blended with a thick slice of cake — your choice of either vanilla, chocolate, or red velvet. The secret to its success is the fact that each individual component is so good on its own: The cake is dense, rich, and moist. And the shakes are dynamite too, especially the chocolate version, which is made all the more special by the addition of tiny chunks of real chocolate in the mix. Combining the two is a near perfect pairing — like eating a hot dog at a ball game or watching a double rainbow in the company of a hippie. Sugar Rush also makes other amazing confections, from fudge-stuffed chocolate chip cookies to Krispy Kreme doughnut bread pudding. 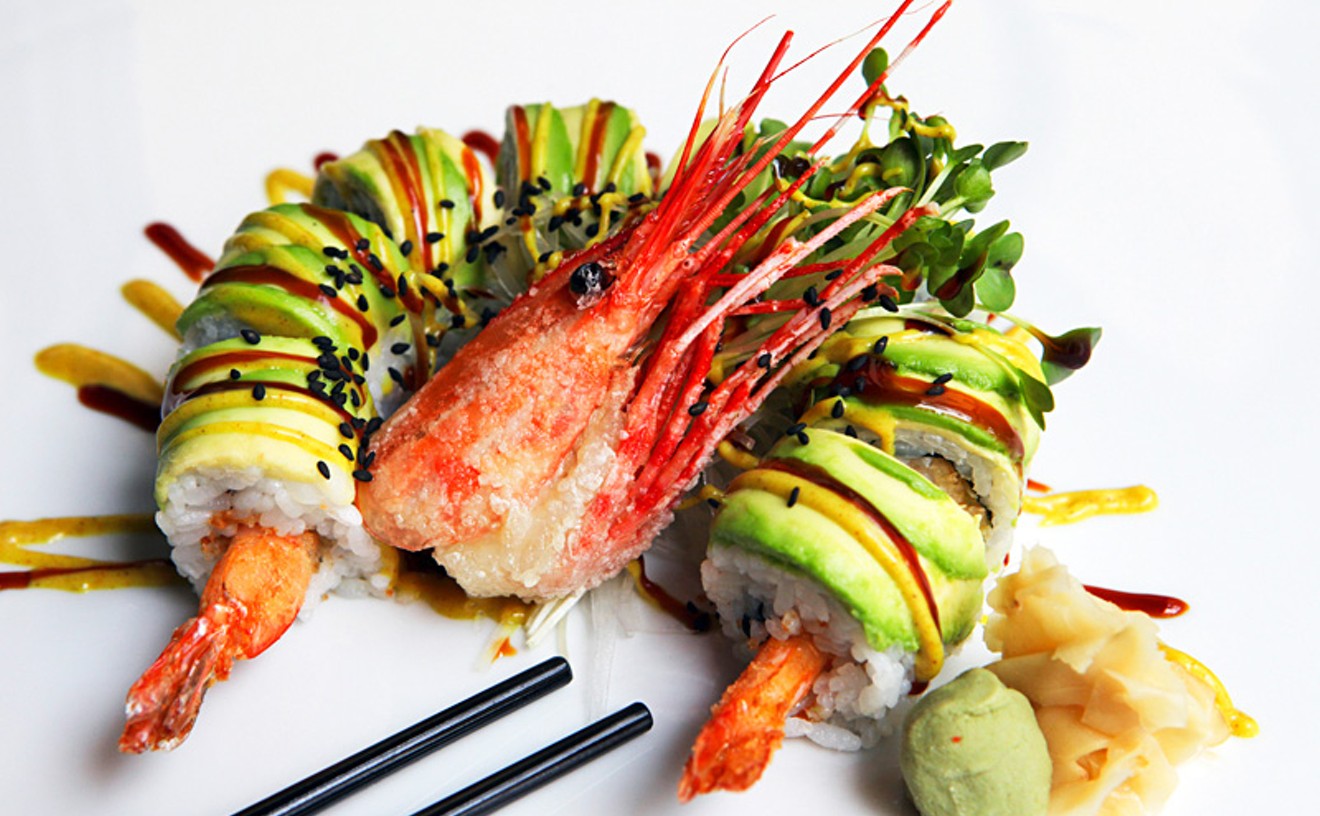 Candace West
Kubo means "long life" in Japanese and "small house" in Tagalog, the language of chef-owner Roy Villacrusis' native Philippines. "Asiatic cuisine" is Villacrusis' fiercely individual, breathtakingly inventive take on the cuisines of Asia, inspired by sushi but blasting off to an entirely new and different universe. Though open less than a year, Kubo earns its Best Restaurant honors by being simply the most exciting place to dine in Palm Beach County. With dishes like liver surf and turf (using monkfish liver), green-tea-cured salmon, and a Kobe hot dog with kimchee, it's the kind of restaurant that would set palates drooling in such sophisticated, foodcentric cities as New York, Chicago, and San Francisco, never mind its exceedingly modest, design-on-a-budget appearance and location in a corner of an almost-deserted North Palm Beach shopping mall. Now there's no reason to complain about a same ol', same ol' local restaurant scene. If you're hungry for food that excites and challenges your taste buds, you'll hope the small house that is Kubo has a very long life indeed.

You know a gelato restaurant knows its shit when Sylvester Stallone has gone through the drive-through. Sonny's Gelato Café in Boca Raton is within walking distance of Florida Atlantic University's main campus and apparently within driving distance for "Rocky" to feed his habit. The popular gelato café features more than 40 flavors on its menu. When asked to name the most popular one, staffers couldn't pick and instead spouted off flavors like banana, Nutella, and peanut butter. The family-run business also serves cakes imported straight from Italy, plus panini sandwiches and subs for those craving an actual lunch.

Crepes by the Sea

Downtown Delray Beach is probably about as close as one is going to get to a small-town feel around here. Atlantic Avenue is like an old-fashioned main street running through Mayberry or Smallville. Of course, you can also valet the beach. (This is still Palm Beach County, after all.) But just off the avenue, hidden behind a snooty art gallery, is a small, charming café — with just four tables inside and two outside — that serves up the fluffiest pancake-like dishes you've ever tasted. The savory crepes — like the Cousteau stuffed with smoked salmon, crème fraiche, and capers and topped with onions and a squeeze of lemon juice — are a satisfying and healthy-ish meal. The sweet crepes are just like the Nutella- and strawberry-smothered desserts you can buy from Parisian street vendors for a few euros. Round things out with a freshly made cappuccino and it's like a little slice of Gallic heaven right here in South Florida.

Wild boar cacciatorini with red onions and aged cheddar. Roasted eggplant with chilies, capers, and shallots. Local beet leaf with lemon and garlic. These aren't just pizzas, folks. They are visions both mad and beautiful, dreamed up by Dak Kerprich, chef/owner of Lantana's Pizzeria Oceano. Kerprich is an auteur when it comes to pie making. He makes his own mozzarella and crafts only as much dough as the restaurant will go through daily. He sources local and artisanal ingredients and highlights their origin on his daily-changing menu. And he's simply fanatical about pizza — some might say to a fault, since Pizzeria Oceano allows no takeout (it would ruin the pizza's texture) or substitutions (he's the chef, not you). But the proof is in the product: Kerprich's wood-fired crust is airy-light yet brusque as a thin cracker. His toppings are always in perfect proportion, and his sauce is the perfect balance of sweet and tart. Sure, the converted bungalow is tiny and frequently packed and is open only from 5 to 10 p.m. every day excluding Sunday (and even then, the kitchen often closes early). But these pizzas, concocted by one mad genius of a pie maker, are simply worth it. 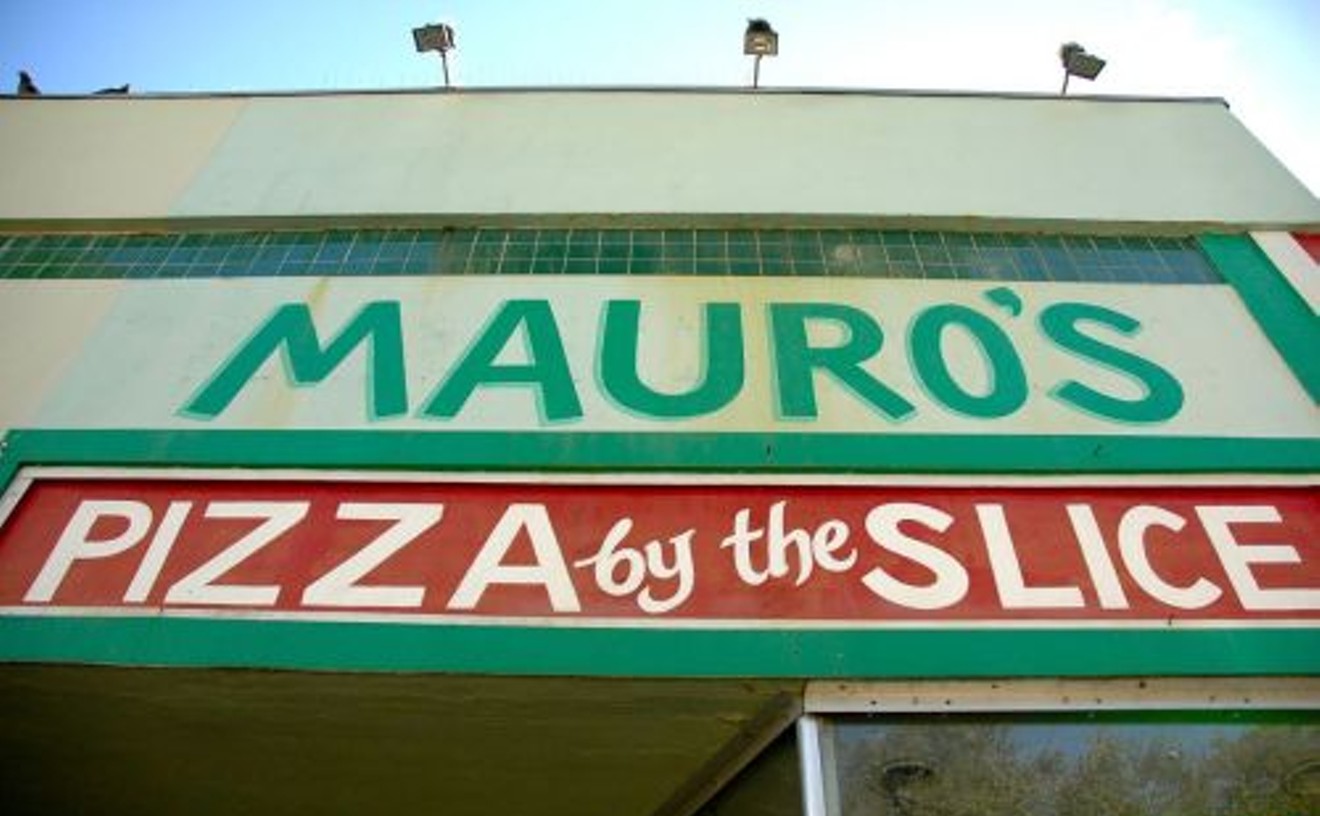 The service-with-a-snarl shtick — a gimmick that peaked in the late '90s, when Seinfeld's "Soup Nazi" was nothing short of a cultural phenomenon — can wear thin in a hurry, particularly if the food doesn't counterbalance the server's indignation. The continuing success of this brusque downtown Hollywood mainstay is testament that it's got the pie to back up the 'tude. Forget about clean eating; things will get messy. Each slice is so epic that it spills onto a second plate and necessitates a fistful of paper napkins that you can only hope will make a dent in the wreckage of grease, cheese, and sauce flying around your person. Your best bet for a good experience: Speak clearly, carry cash, and don't wear white.

"How are the bagels made? Do you boil them? Huh?! DO YOU?!" South Florida locals are known to kvetch over their bagels. You see, the perfect bagel is boiled and then put in a rotating oven until it's a golden, toasty brown, and New York transplants are experts at detecting fakes. Bagel Boyz employees nod politely because yes, they've heard this question a million times. And yes, the answer always pleases the picky customers. The little family-owned business has exploded since the first store opened in Jupiter's Abacoa Plaza many years ago. The one store has since turned into a small chain with four order-at-the-counter-style restaurants that extend from Jupiter all the way down to West Palm Beach.