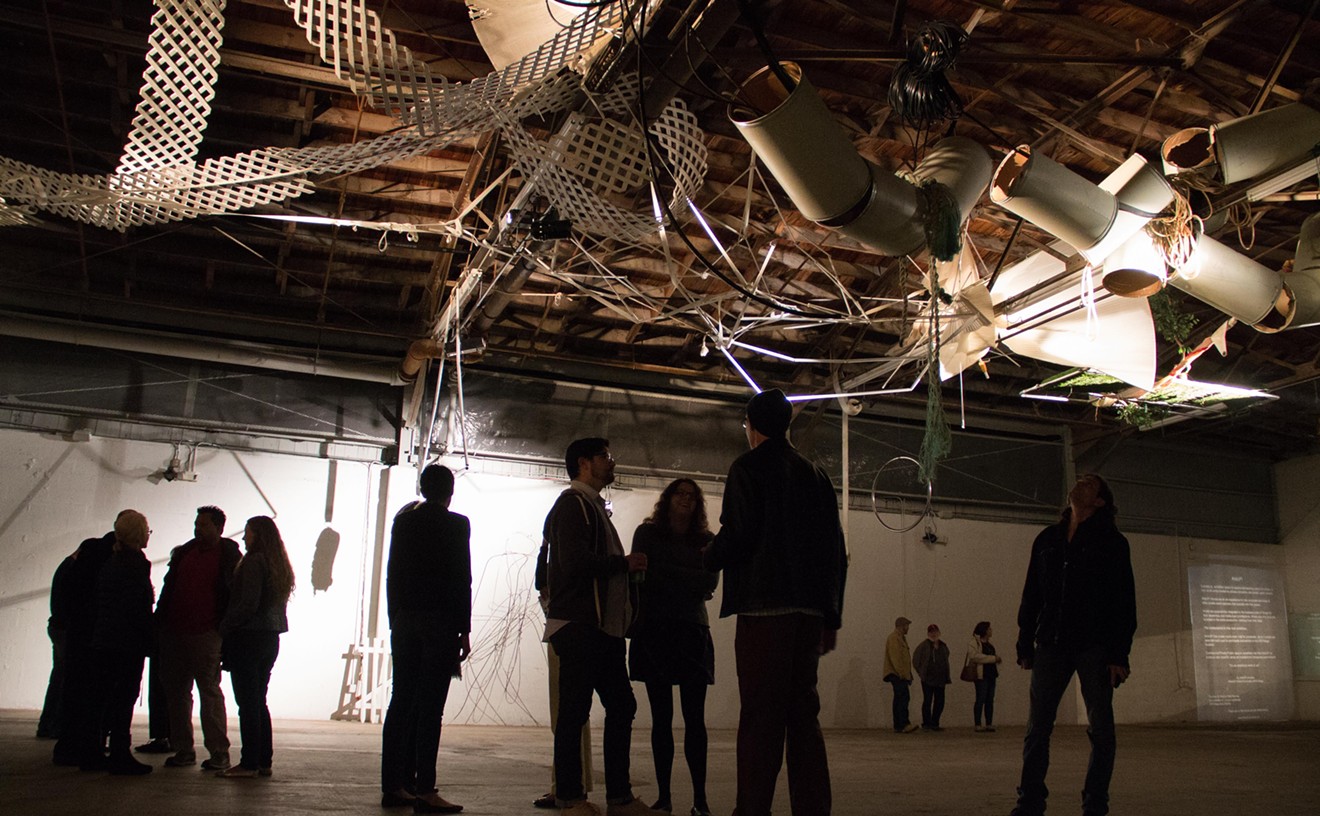 The "Up" in "ArtsUP" stems from the fact that when you walk into the gallery, which just opened in April, your eyes are uncontrollably drawn toward the ceiling. The space inside is massive — 5,000 square feet — and the art hangs (or floats, or soars) from the ceiling. The effect is awe inspiring: In artist Jamey Grimes' recent installation, called "Wash," neon, coral-like ripples glide high above the viewer, appearing to bob up and down on the air. It's dreamlike, and unlike any other gallery in South Florida. The setup also has a bonus feature: Since there's rarely anything on the ground, the space can be used for events.

Tucked away among the Irish pubs, the Mexican restaurants, and the gaudy storefronts of Mizner Park is a beacon of both local and world culture. The Boca Raton Museum of Art is a 44,000-square-foot facility that opened in 2001. It is simultaneously an inviting space that celebrates human creativity and a humble work of art itself. In addition to the revolving exhibitions featuring painters, photographers, and sculptors from across the breadth of the American experience, the museum houses a permanent international collection that has over 5,000 works of art spread throughout the building and the outdoor sculpture garden. The museum's current exhibitions include environmental portrait photographer Arnold Newman and New York-based portrait painter Kehinde Wiley, whose colorful work of contemporar brown-skinned people striking heroic poses in regal, Anglo-European settings is the epitome of what the Boca Museum of Art is striving for. From film screenings to wine-and-cheese gala openings, the museum welcomes the full scope of society's dreams and visions and is as varied and diverse as South Florida itself.

In March, an eccentric two-day performance art festival was launched in Fort Lauderdale's artsy FATVillage. "The Nerve" introduced 14 artists and creative groups performing conceptual pieces. The majority were slightly bizarre (a good thing!) and totally mesmerizing. Artist Lisa Marie Stephens attempted to break 50 cement bricks with a sledgehammer. Karina Pais carved words onto carrots. Rosemarie Romero got into character using a hyper-kitschy nail salon as her backdrop. Jen Clay brought stop-motion animation, handmade costumes, and puppets all together to give silly yet creepy vibes in her projected pieces, "Let's Be Friends" and "It's All Really Real."

Bizarre cartoons are the specialty of Christopher Ian MacFarlane, a self-taught 30-something who works with vibrant color palettes in a rare, playful way. Influenced by Looney Tunes cartoons and cubism a la Picasso, MacFarlane's murals are full of characters who look like they've gone mad, like a wolf riding a trash-can rocket, or a lady with a schoolmarmish hair bun and dress but a grotesque face. His work has been commissioned all over town at sites including Young at Art Museum, FATVillage, Respectable Street, and Broward College. In addition to his 2-D work, he's been experimenting with movable robot sculptures, like an "animatronic raccoon" and a "spaghetti mutant" with light-up devil eyes.

Usually, the phrase "street artist" conjures up the idea of some crust-punk with paint cans scrawling graffiti or a Wynwood hipster painting a wall. But Robin Merrill outdoes them all. A woman who defies stereotypes (she's a Christian missionary with a wicked sense of humor, a white lady who hangs with Seminole and Miccosukee Indians), she's always thinking up projects to improve the world. At her brick-and-mortar shop, the Upper Room Art Gallery, she sells fair-trade gifts and paintings. In 2013, she won a Knight Foundation grant to keep alive the tradition of cypress canoe carving. And this May, she took action to combat one of her pet peeves: dangerous intersections. The City of Fort Lauderdale won an "Art of Community" grant from the Community Foundation of Broward for their "Connecting the Blocks" project and Merrill was hired to paint her design at crosswalks along Breakers Avenue in bright, eye-catching colors and geometric designs. The project works as a beautifying measure but doubles as a traffic calmer, since people slow down to check out the works. A third effect is that the patterns evoke the underground aquifers that nourish us and our land. Genius!

Lake Worth-based artist and filmmaker Jacques de Beaufort boasts an oeuvre that is made of magic. His paintings and drawings usually consist of shamanistic, slightly surreal images (and exotic topless chicks); red, gold, and orange tones convey power and mystery. This past year, he won us over with "Deep Inside the Man-Cave," a series of portrait drawings (and his self-portrait) in which he masterfully captures the aura and essence of masculinity in his male subjects, all friends like PureHoney magazine publisher Steve Rullman and Raggy Monster bandmates Sage Duvall and Billy Schmidt. With pastels, pencil, and white conté, de Beaufort allows the men's individual personalities to jump off the page and prompts the viewer to wonder more about each person. De Beaufort is also an associate professor of visual arts at Palm Beach State College.

Absurdity. Surrealism. Playfulness. These qualities pop out in almost all of the work by Clay, who admits in her artist's bio that her practice "is influenced by hallucinatory experiences that manifest doubt in one's surroundings and the self." The artist, who holds an MFA from the University of Florida, invites viewers on a subversive ride through her experimental, multimedia body of work. The charming and quirky North Carolina native is inclined to juxtapose realism (sometimes using leftover food or making a nod to grotesque bodily fluids) with cutesy pop-culture elements. This both entices and throws off viewers. A jack-of-all-mediums, she sews her own costumes, paints, sculpts, and even makes stop-motion animation.