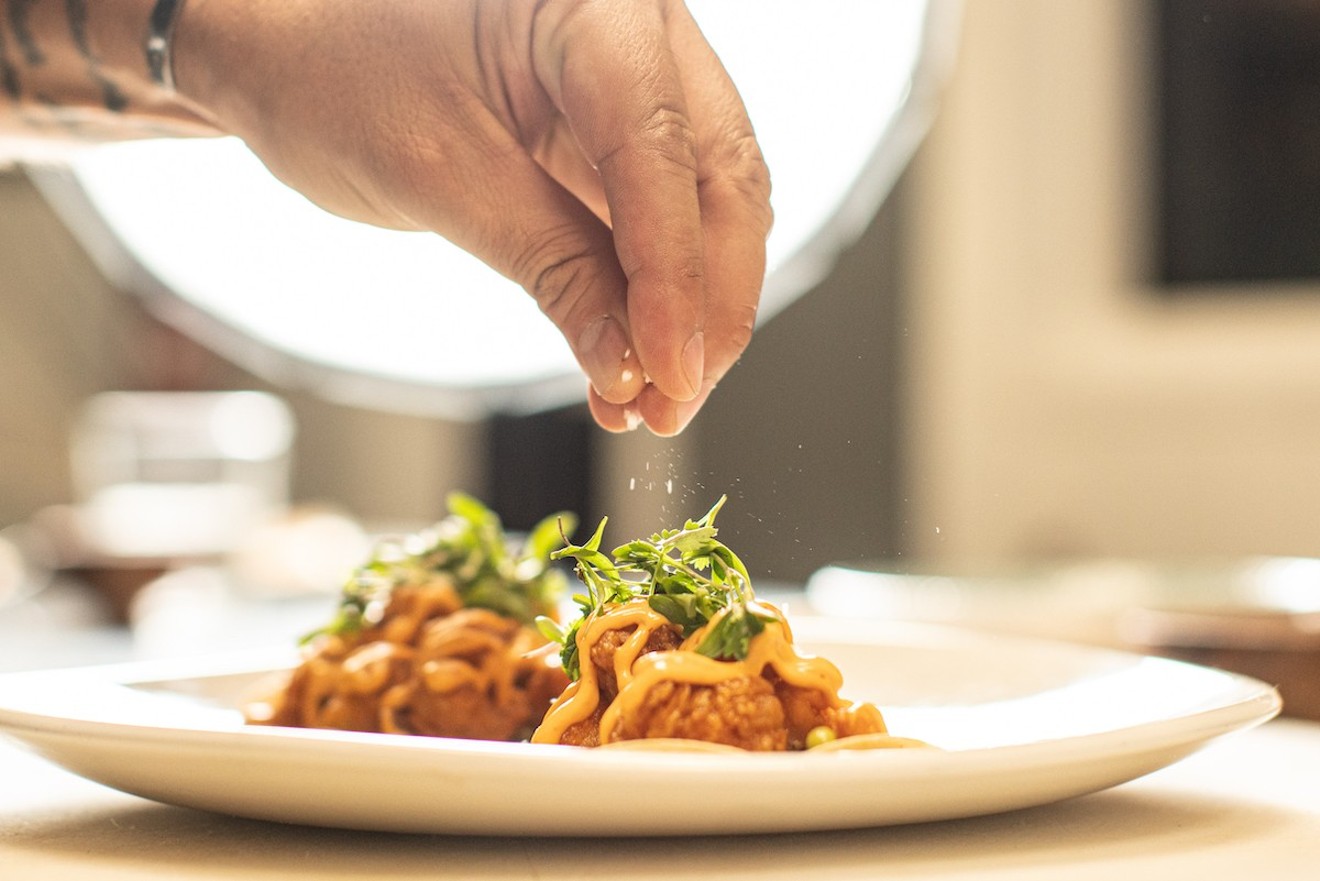 Aida is renowned for its seafood with a Mexican flair, like this taco de chicharrón with corn-coated shrimp. Aida/Colibri 4 Restaurant Group photo
A little bit of the Grove has made its way north to the Village.

“When we were thinking of expanding Aida, we walked around Flagler Village and realized that it’s where we needed to be,” Eduardo Gavilan, co-owner of Colibri 4 Restaurant Group, which owns Aida, tells New Times. “The vibes are amazing and when the train goes by, there is such character. We see it as the next Wynwood and it’s a place to bring everyone together.”

Aida’s Fort Lauderdale location now occupies the prior American Icon Brewery Kitchen & Taproom building located at 911 NE Fourth Avenue in the graffiti art-clad neighborhood. With Aida’s arrival, the building has received a total gutting and makeover from its once simplistic brewery vibes. Now, it has a contemporary aroma with a central cherry blossom tree, sun-shaped mirrors, and a mural of the restaurant’s namesake muse by ABSTRK.

“We see it as a very trendy and hip space, but not snobby,” says Gavilan. “It’s very relaxed with a nice laid-back and welcoming ambiance.”

And, if folks aren’t relaxed, perhaps one of Aida’s cocktails will help. Among its signature cocktails are the "Jade" (whiskey, spicy ginger infusion, sage syrup, and lime) and, arguably the regulars’ favorite, the "Violeta" (mezcal, chartreuse, prickly pear, lime, and simple syrup). 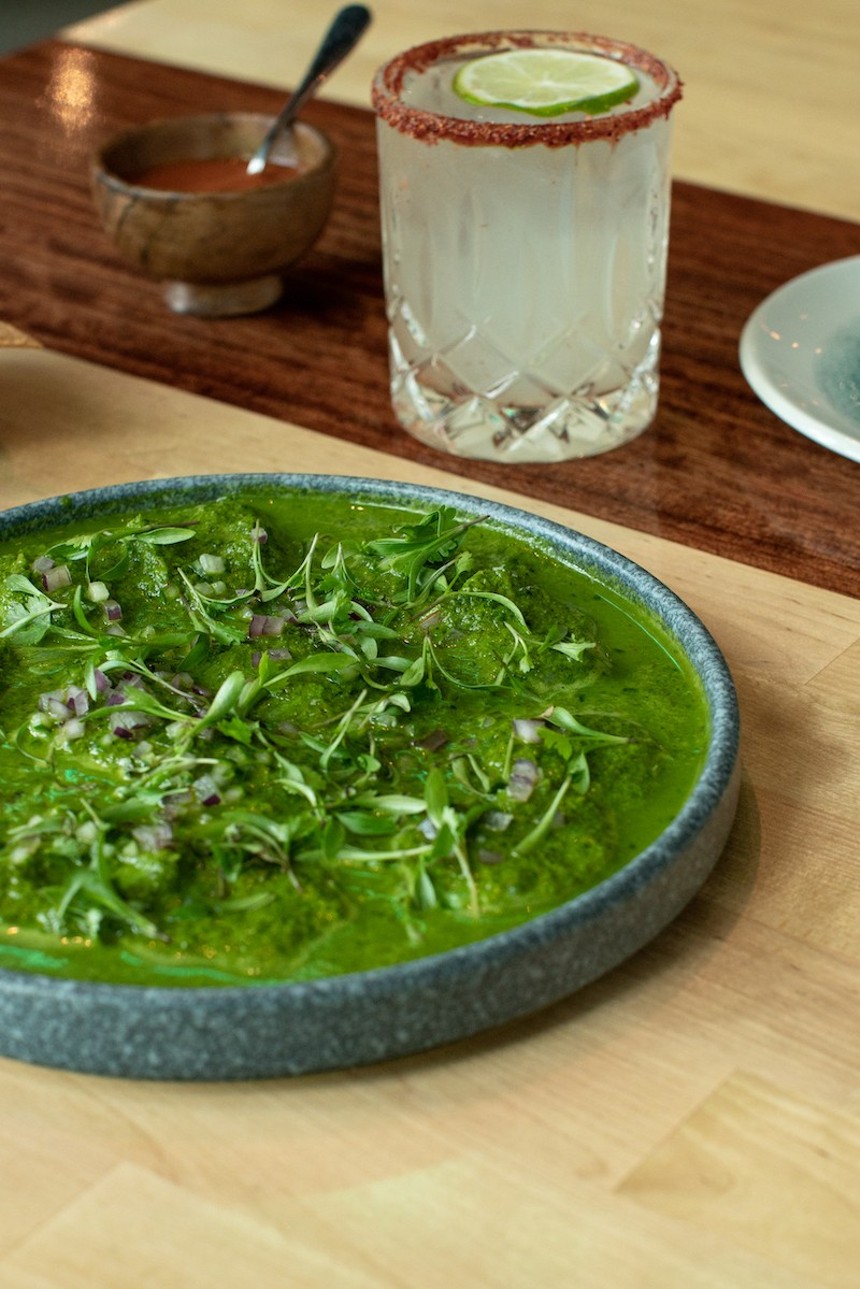 Aida's ceviche verde de camarón
Colibri 4 Restaurant Group photo
On the food front, Gavilan says the restaurant keeps more than 400 ingredients in its kitchen. Its menu – spanning tacos, tostados, steaks, and starters – is anchored by fresh seafood offerings that are flown in every two to three days. These include a sauteed octopus with salsa talla, a corn-crusted Chilean sea bass, and lasagna Azteca layered with fresh pink shrimp, poblano sauce, gouda, corn tortillas, and cilantro.

“While there has certainly been an explosion of Mexican restaurants in Fort Lauderdale in recent years, there is nothing else like this – Mexican seafood – that exists,” says Gavilan. “If you haven’t been, you haven’t tasted food quite like this.”

Aida. 911 NE Fourth Ave., Fort Lauderdale; aidarestaurant.com. 5 to 10 p.m. Tuesday through Thursday, 5 to 11 p.m. Friday and Saturday, and noon to 5 p.m. Sunday.
KEEP NEW TIMES BROWARD-PALM BEACH FREE... Since we started New Times Broward-Palm Beach, it has been defined as the free, independent voice of South Florida, and we'd like to keep it that way. With local media under siege, it's more important than ever for us to rally support behind funding our local journalism. You can help by participating in our "I Support" program, allowing us to keep offering readers access to our incisive coverage of local news, food and culture with no paywalls.
Make a one-time donation today for as little as $1.