The Plant Based Treaty is a ceremonial document created by a team of activists. The goal: to help communities and individuals practice and promote sustainability and fight global warming by moving away from animal agriculture. Launched on August 31, the treaty already has been endorsed by leaders around the world, including New York State Sen. Julia Salazar (Brooklyn), Connecticut State Rep. David Michel (Stamford), several members of the European Parliament, and more than 100 businesses and 250 NGOs.

“Part of Boynton Beach’s sustainability plans for the city is to promote plant-based food,” says Anita Krajnc, global campaign coordinator for the Plant Based Treaty. The Plant Based Treaty team has been promoting the concept since its launch, encouraging individuals, organizations, businesses or cities, states, or provinces to sign up.

According to its website, the treaty is focused on three principles:


“The City of Boynton Beach has committed to reducing community-wide greenhouse gas emissions 50 percent by 2035 and achieving net zero by 2050,” Rebecca Harvey, the city's first sustainability coordinator, tells New Times. “Promoting plant-based diets is an important way to help meet this goal and help improve the health and sustainability of our city.”

Though Boynton Beach has endorsed the Plant-Based treaty, carnivores need not fret — the treaty is just designed to get people to think about a vegan lifestyle and how it could improve life on this planet.

Boynton Beach restaurants have been ahead of the curve when it comes to plant-based food. Those that cater to the vegan crowd include Blondie's Vegan Bakery & Cafe, JuiceBerry, and Pizza Rox, to name just a few. 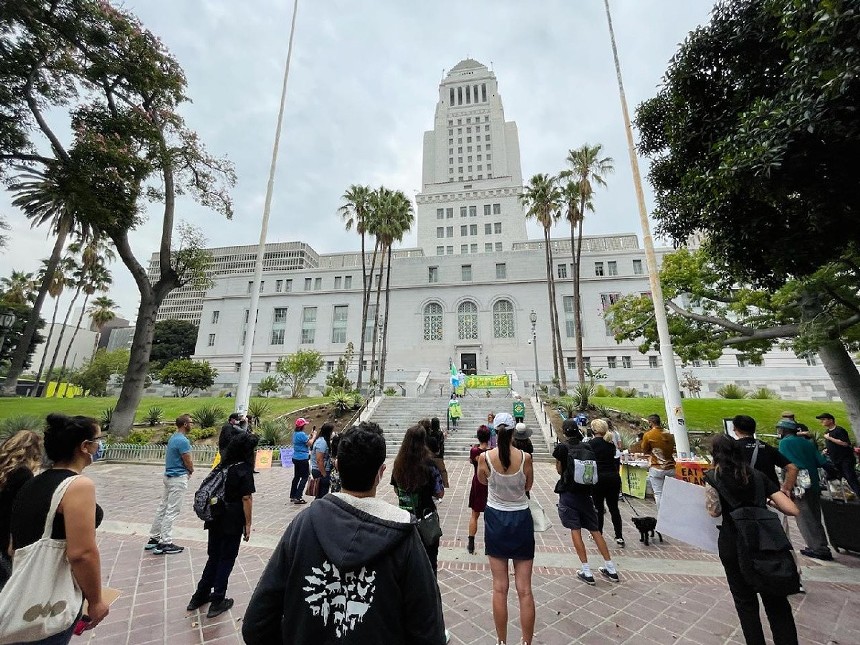 “Cutting methane is the biggest opportunity to slow warming between now and 2040,” Durwood Zaelke, president of the Institute for Governance and Sustainable Development and a lead reviewer for the IPCC, told the Guardian in August. “We need to face this emergency.”

Boynton Beach isn’t the only metropolis moving toward meatless eats.

Earlier this summer, the city of Berkeley, California, committed to shifting half of the city’s spending to plant-based foods by 2024 in an effort to combat climate change. Its long-term goal is to eliminate all spending on animal food and shift to veg-forward options instead.

Only one other city has joined Boynton Beach in signing on to the Plant Based Treaty: the city of Rosario, northwest of Buenos Aires in Argentina.
KEEP NEW TIMES BROWARD-PALM BEACH FREE... Since we started New Times Broward-Palm Beach, it has been defined as the free, independent voice of South Florida, and we'd like to keep it that way. With local media under siege, it's more important than ever for us to rally support behind funding our local journalism. You can help by participating in our "I Support" program, allowing us to keep offering readers access to our incisive coverage of local news, food and culture with no paywalls.
Make a one-time donation today for as little as $1.
Hannah Sentenac covers veg food, drink, pop culture, travel, and animal advocacy issues. In addition to the Miami New Times, she's written for Live Happy magazine, Paste magazine, Thive magazine, and MindBodyGreen.com. Hannah is also editor-in-chief of LatestVeganNews.com.
Contact: Hannah Sentenac
Follow:
Twitter: @hannahgetshappy