New Times has always had a weakness for forbidden fruit. Photo by Laine Doss
Juneteenth, the recently minted national holiday that commemorates African-Americans' liberation from slavery, is a day of reflection and celebration.

As spring gave way to summer in 2021, Congress unanimously passed a bill declaring June 19 a federal holiday. President Biden signed the National Independence Day Act on June 17, just in the nick of time for Americans to celebrate.

This June 19, Americans will have had ample time to prepare for official celebrations. Like other major holidays, attendant corporate commercialism is to be expected. Crass, yes, but with a veneer of pride and patriotism.

Unless you're Walmart, it seems.

The Arkansas-based retail giant recently came out with a line of Juneteenth items that went viral for all the wrong reasons. The company released a line of party plates, napkins, and beer koozies bearing the slogan "It's the freedom for me." Doesn't exactly trip off the tongue, but it sounds sufficiently innocuous. No harm, no foul, right?

But Walmart didn't stop there. It also rolled out a commemorative "Juneteenth" ice cream, which invites us all to "Share and celebrate African-American culture, emancipation, and enduring hope."

What, you ask, does an ice cream that celebrates African-American culture, emancipation, and enduring hope taste like?

According to the flavor scientists at Walmart, it tastes like...red velvet cake with a cheesecake swirl.

This creative juxtaposition inspired Aaron Thorpe, a co-host of the popular Trillbilly Worker's Podcast, to take to Twitter on Monday morning to cogently observe: "capitalism is awesome."

A little later in the day, Daily Show correspondent Roy Wood, Jr., was moved to muse, "Would you like some Juneteenth Ice cream on a Juneteenth plate as you sip your beer in a Juneteenth Koozie?"

If you correctly predicted that such observations would inspire others to chime in, consider yourself a winner.

Just don't expect to receive a pint of Juneteenth ice cream as a prize.

Walmart promptly released a statement: "Juneteenth holiday marks a celebration of freedom and independence. However, we received feedback that a few items caused concern for some of our customers and we sincerely apologize. We are reviewing our assortment and will remove items as appropriate."

On Tuesday evening, New Times got to wondering what Walmart meant by "as appropriate." Plus, being insatiably curious about all matters related to food, we really wanted to know what a tasteless ice cream tastes like.

So we drove up to the North Miami Beach store and poked around.

No luck. Nary a Juneteeth pint, plate, or koozie to be found.

Further north in the freezer section of the Hallandale Beach store, however, we hit paydirt: stacks of Juneteenth containers — cozied up alongside a batch of special-edition Pride ice cream, no less. (White chocolate ice cream with brownies and cherries. Make of that combo what you will).

We grabbed a pint of each. (No party supplies, though. Those were nowhere in sight.)

When we scanned our pints at the self-checkout, the computer screen flashed "restricted" at the Juneteenth. A manager soon arrived, took one look at our ice cream, and said, "Oh, wait. I think those were recalled."

This she confirmed with a swipe of her portable barcode reader.

"But I think you want your ice cream," she said, just as we were resigning ourselves to failure. "So go ahead and scan the Pride ice cream twice.

"By the way, it's delicious," she added, gesturing to our pint of red velvet and cheesecake swirl before excusing herself to attend to other pressing retail matters. Screenshot via walmart.com
Unlike the blonde modeling the T-shirt above — which at last check was still offered for the "Clearance" price of $9.99 on the walmart.com website — the store manager was Black.

And she was also correct: The ice cream, reposing in its little tub in a festive swirl of red and yellow, tastes sweet and creamy. It would have been a delightful addition to any Juneteenth gathering, if only it were packaged simply as ice cream. 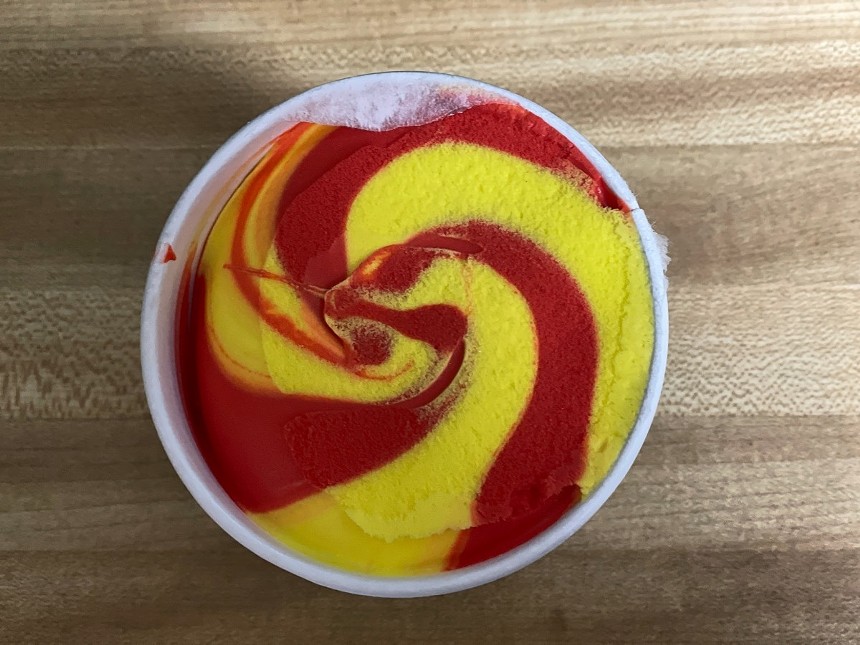 Juneteenth ice cream swirl.
Photo by Laine Doss
KEEP NEW TIMES BROWARD-PALM BEACH FREE... Since we started New Times Broward-Palm Beach, it has been defined as the free, independent voice of South Florida, and we'd like to keep it that way. With local media under siege, it's more important than ever for us to rally support behind funding our local journalism. You can help by participating in our "I Support" program, allowing us to keep offering readers access to our incisive coverage of local news, food and culture with no paywalls.
Make a one-time donation today for as little as $1.