Drink specials, a packed house, and an ear full of reggae music... Sounds like someone has a case of the Mondays! There are few times that the party is 100 percent guaranteed, which is what makes E.R. Bradley's weekly reggae throwdown so danged important to our collective well-being. Gracing the stage each and every Monday night, local reggae favorites Spred the Dub have good times oozing from their pores while shaking out their own tasty jams and groovy covers. The six members don't just keep all the fun for themselves; they bring in opening bands more times than not, giving two-for-one a new meaning. Spred the Dub has been picking up speed, touring the country, and playing SunFest in 2014, but it's Bradley's where the real magic happens. Over the years, the band has moved its official Monday Night Reggae party around Clematis Street, but it has never felt more at home than at Bradley's, and it shows. Drink specials, cheap late-night food that is actually good, and never a cover. 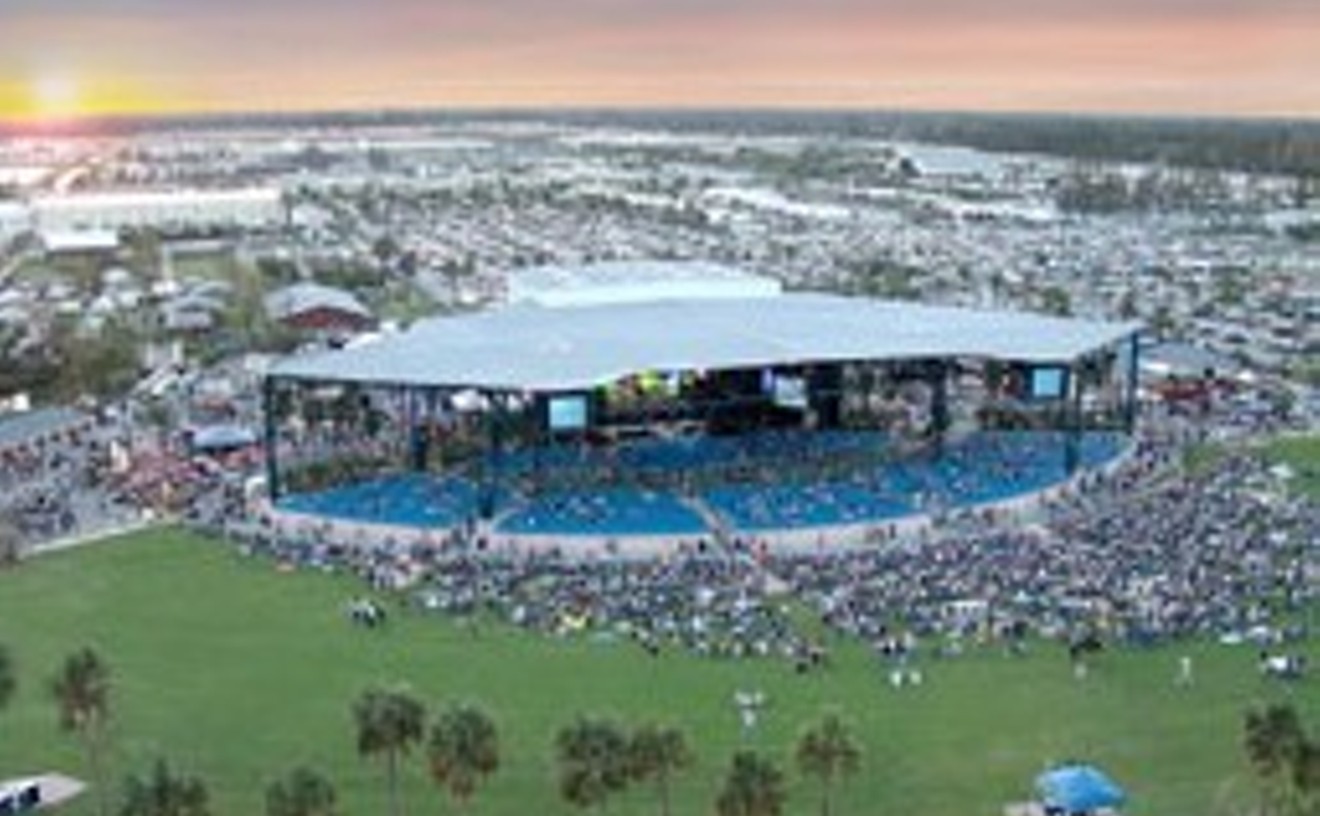 From shore to shore, the inaugural Coastline Festival made its way from Tampa to West Palm Beach's Cruzan Amphitheatre, bringing with it enough electro pop to please absolutely everyone born from 1987 to 1995. The lineup included WPB natives Surfer Blood, who — with lead singer John Paul Pitts half in the crowd — performed the Lebowski-loathed Eagles' tune "Take It Easy" for a screeching crowd of superfans. Other acts included Passion Pit and Matt and Kim, both of whom played their final shows of 2013 at Coastline, adding the liveliest music to this "musiculinary experience." There was a serious variety of both food trucks and craft beers. Brews were from the coolest spots around, like Due South Brewing, Funky Buddha, Dogfish Head, and Magic Hat. This added an air of indie to a venue that usually boasts ketchup on hot dogs as the finest feast available. You could snag a Radio-Active Records pin for your lapel or tote from an old-fashioned, coin-operated toy machine, don flowers in your hair, or get someone to cut your shirt into a unique design onsite. Colorful tattoos were displayed proudly too. It was a perfect combo of new and cool. All there was left for you to do was hold your iPhone high, wave it side to side, and sing "To Kingdom Come."

You're driving down to South Beach for the night to catch Steve Aoki smash cake in someone's face and press mad buttons, when you press play yourself, but on your iPod. West Palm Beach native Will Brennan's Prodigal Son release comes up first. And lo and behold, Brennan's also heading south on 95 in the early verses of the opening track, "RNR." The whole album has both mainstream radio appeal and a delightful enough edge to keep it interesting and memorable. Brennan is one of the few hip-hop artists signed to Aoki's Dim Mak Records. Since this free full-length, Brennan's continued to create songs influenced by South Florida — with themes like humping in the ocean and hating his job. With or without a substantial label behind him, we think Brennan's got enough flavor and skill to break the sunny glass Florida ceiling.

West Palm Beach's New Coke released a frenetic three-song EP this February that's packed with negativity and punk hysteria, and we love it. It's hypnotic, and yeah, it makes you want to sort of barf. But in a totally good way. The Slovenly Recordings recording can be downloaded online, or you can order a seven-inch vinyl for your casa. Songs include "Duct Tape Your Mouth," "I'm Not a Fan of Your Romance," and "I Am Drunk, I Have a Gun, I Want Names." This is the band's first release in two years, and the PBC trio killed it — like they strapped it to a chair and then beat the shit out of it until it died. And now the world has this incredibly intense product that was recorded in Miami with Torche's Jonathan Nunez. Slovenly's little album disclaimer says to expect a full-length this year, so we'll just sit here, hold our breath — maybe duct tape our noses too — until the LP hits the web and our record player.

West Palm Beach's beloved Surfer Blood gives us the warm and fuzzies. The band made us proud on Late Night With Jimmy Fallon. They made us proud touring with the Pixies. But what we really love is how the band has stuck to its roots; the band members' sunny, palm-tree-laden upbringing left an impression. This was made perfectly clear with the premiere of "Say Yes to Me," from their sophomore album, Pythons. The clip takes the locals home to Howley's, an essential diner that has always been close to landmark status for those in the know. Now, a little piece has been shared with the world. The video is a solid look into the band's lifestyle: Its fun side shows through, and there are tater tots. Even rock stars love tater tots. "Say Yes to Me" is a breezy jam, and the weird costumes and trippy story line make for a video worth watching. Say yes to Surfer Blood; say yes to tots.

Lake Worth's Wake Up is riding high on a big old indie awesome wave. The band is hot right now, and yet it's also as cool as can be. It's on tour with Surfer Blood, played CMJ, and hasn't even put out a full-length album yet. It does, however, have an impressive grungy and power-pop-heavy EP, Forever Home, out on Decades Records. The disc even got some love from the omniscient blog Brooklyn Vegan. It's got, among other things, a touch of Built to Spill, a tiny taste of Weezer, and a lump of Pavement. Singer and songwriter Evan Mui is a scene vet in these parts. He's played with other worship-worthy bands like Guy Harvey and the Dewars. The bandmates are the best of friends: There's Mui, guitarist Bobby Yapkowitz, bassist Austen Bemis, and now Suede Dudes' unfortunately named singer Bryan Adams as drummer. This band is gripping rock 'n' roll by the nuts right now and is sure to coast its way to stardom, and soon.

If you don't appreciate Devalued, chances are good you're an asshole. It's like all those people who didn't like Little Miss Sunshine. They're awful people. Straight up. The three guys from Broward who compose this D-beat band are absolutely charming. The music they make is as heavy as it gets, but at least two of them really enjoy Jamiroquai — Conor Barbato and Nico Suave, not drummer Matt Stoyka. Their album Plagues starts with a song called "This Town Is Full of Goobers" and includes two others titled "Crack Money" and "Coke Dick" — and of the three, only Suave isn't straightedge. You loving them yet? OK, here's one more. On their Facebook page, they describe their sound as "salsacore." Adorbs! As a group, they also have the power to deeply anger with their dark-as-fuck metal sound. They don't perform nearly enough, but you may have seen them at Churchill's opening with Holly Hunt for Jucifer or at our Green Room's County Grind Night. Last year, they toured the country with Suave's other project, Nunhex, showing 30 cities in the U.S. that brutal music can enrage and keep you smiling with glee at the same time.

When you think folk music, it's easy to go right to James Taylor daydreams or rewatch A Mighty Wind. There's a whole lot more folk than these sensitive classics, and it swims through genres in ways you have to feel to believe. When it comes to folk music in South Florida, it has an edge, it screams, it lights fires, and its home is in Lake Worth. No one exemplifies the crusty, punkabilly scene with more pride or tattoos than Everymen. The often-shirtless gaggle of string-toting dudes brings the grime to what was once an elegant scene and finally turns it into something worth listening to. More than just an interesting look, the Everymen crew knows how to play and has emerged as one of the most important bands in Lake Worth, which makes it one of the most important bands in South Florida. The guys take their craft and position in the scene seriously, but their sharp recordings and videos don't do justice to their live performance. An Everymen show is a full-body experience that involves as much theatrics and crowd participation as it does musicianship and smiling faces. This primo live-show guarantee is why they are a touring machine, road-tripping around the country and proving to everyone else what we already know: Folk has changed for good.

It's all about the string. In an area where reggae reigns and indie bands rule the night, it's been incredible to watch the rise of string music in South Florida. The true bluegrass sound being emitted by banjos, upright basses, and fiddles throughout our bubble has been startling in the best way possible. Why simply jam when you could "jamboogiegrassicana"? That's what the Short Straw Pickers call their funked-up and homegrown style of bluegrass. They've earned the right to coin their own subgenre, considering this über-talented gang grew out of the orchestra program at Boca Raton's Lynn University. Lead singer and guitarist Jack Schueler has been around the local scene and is happy to reach peak performance with the Short Straw Pickers. Their debut album, Upon That Hill, was a huge gift from the band to the world and is propelling them to the road for a string of festival gigs. Whether it's at a festival or elsewhere, these pickers take pride in physically taking their music to as many people as will listen, which is a lot. The Short Straw Pickers bring style and incredible musicianship to the genre, respecting its pure state while flipping it on its head — as every band should.

Not all local jam bands are created equal. Some seem to run laps between the Funky Buddha Lounge & Brewery and the Funky Biscuit, which is solid. We need them — they make the scene what it is. But some local jam bands break through and travel the country delivering their slice of South Florida style to every corner of the U.S. No one does it better than Fort Lauderdale's the Heavy Pets, jamming their way through your most dancetastic live music outings. Whether it's a New Year's show, full-on festi, or random run-in, the Pets always make their way back home and into your hearts, no matter how far they tour. Your friend may have watched the Heavy Pets slay it in the middle of a sweaty mob at Bonnaroo, but you get to see them up-close and personal on a breezy Saturday night at Guanabanas. What makes the Pets extra special? They have side projects aplenty, cutting up the lineup to share the love so there's constantly music coming from the guys. This divide-and-conquer technique shows that the true passion of the band is to get music out in the open and to create with one another. Fact is, when the Heavy Pets, Fat Mannequin, Lather Up!, or the Sugar Dicks announce a show, the community comes out. And the community is everything when it comes to jam.