Of all the dishes on the menu at celebrity chef Geoffrey Zakarian's new restaurant, Point Royal, the lobster roll is the item worthiest of a trip to the strip of A1A where Hollywood meets Hallandale Beach.

There's no chopped or minced meat here. A whole Maine lobster is steamed until the flesh becomes that glorious red. It's then sectioned and reassembled neatly to look like a lobster out of its shell. Tail meat, knuckles, and claws appear virtually intact. Served warm and drenched in Zakarian's signature Coleman's mustard-spiked butter sauce, it's a spicier version of the chef's classic, kicked up a notch with a hint of lemon juice and sriracha.

It comes on a massive potato bun, soaked in so much butter that — after being griddled and toasted to a golden brown — it boasts a rich, croissant-like texture. If you're carb-averse, a pile of springy bibb lettuce can substitute.

Zakarian grew up in Massachusetts and has vacationed everywhere from Ipswich to Martha's Vineyard. Over the years, he's been "inundated with a lot of really bad lobster rolls," he says. He decided to put his eponymous GZ lobster roll on the menu after noticing there wasn't a good one for miles.

Globes full of delicately seasoned crabmeat are paired with an addictive sauce.

But, the veteran celebrity chef says, "Ambiance comes first. My goal with any restaurant is to create a place where people will want to come back. If you're really honest with yourself, a good restaurant isn't just about the food. You want to go to a place where there's a buzz."

Ambiance is also just what the Diplomat Resort & Spa needed. Originally opened in 1958 and rehabbed in 2002, it wasn't a dining destination until recently. Zakarian's place is just one part of a multimillion-dollar project that also boasts Michael Schulson's Monkitail — a swank sushi spot with a karaoke room set to open any day — and the hotel's recently reimagined signature steakhouse, Diplomat Prime.

Zakarian's place is key to this makeover. He got his big break about 30 years ago, when he was named executive chef of the restaurant 44 inside Manhattan's Royalton Hotel. He spread his wings a few years later, when he opened Blue Door at the Delano in Miami Beach in 1995. Then he grew an empire: overseeing the food-and-beverage program at the Water Club at Borgata in Atlantic City, opening two restaurants inside NYC hotels, and, in 2011, debuting Tudor House at Dream South Beach. In May 2013, he even partnered with Norwegian Cruise Line for a three-restaurant deal.

"I fell into this in such a weird way," Zakarian says. "Looking back, I was very lucky... It was just timing that I happened to be at the forefront of opening these really great restaurants."

But Zakarian is better known as a judge on Food Network's Chopped and for his 2011 win on the fourth season of The Next Iron Chef: Super Chefs. Over the past several years, he's also been featured regularly on Food Network shows such as The Best Thing I Ever Ate, The Kitchen, Top 5 Restaurants, and Cooks vs. Cons. His SiriusXM Radio show, Food Talk, airs weekly, and premiered at the 2013 South Beach Wine & Food Festival.

Point Royal, which launched this past February, sits on the ground floor of the newly renovated Diplomat Resort. The restaurant bills itself as coastal American, the type of place you can stop by for a burger and beer or for some oysters and a glass of wine.

Once the site of the hotel's breakfast buffet room, Point Royal is a place you might expect panoramic ocean views. But instead, floor-to-ceiling windows overlook a crowded patio. If you dine at night, it's dark, so the lack of view doesn't matter much. The decor evokes Old Florida, Cuba, and the galley of a yacht. Paneled walls look like a boat's hull, tiny tables are etched with compass designs, and massive potted trees and plants arch over tables and doorways.

When it comes to the food, certain aspects are recognizable from other Zakarian establishments: generous and complimentary bread service, a plethora of crudo options, handmade pastas, and soups. 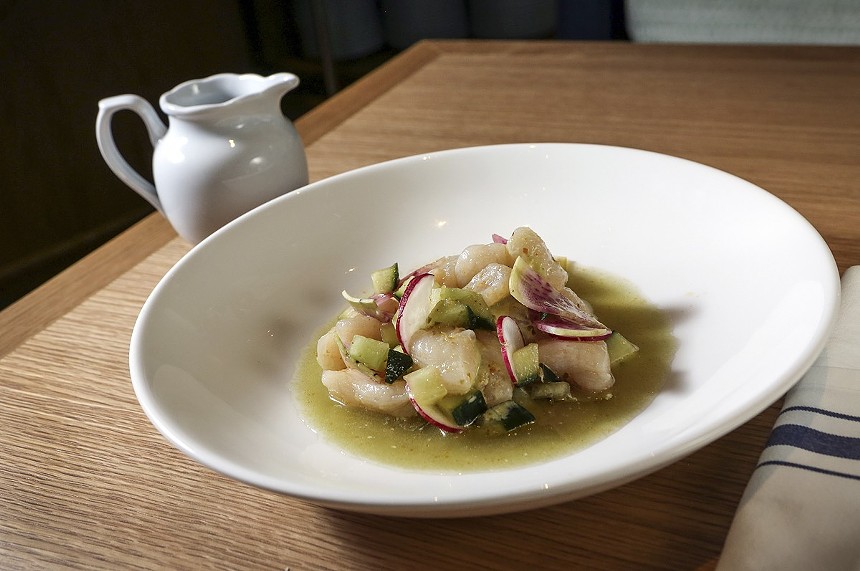 If you're the three-course-meal type, start with something from the raw bar section. Try the lamb tartare, a dish Zakarian says reminds him of eating homemade Armenian food during his childhood. Tiny cubes of Colorado lamb and diced cucumber are tossed with harissa-covered balls of labneh, a yogurt that thickens until it becomes a soft cheese. The whole thing is served with a single crisp sheet of toasted rye bread.

The raw, grassy lamb is far better than the crudo-marinated bay scallop, which sounds mouthwatering on paper but ended up a disappointment. What possessed the chefs to chop the mollusk into fat cubes rather than thin slices? The result is buttery, sweet meat that could have been marvelous beside a light, melon-scented broth but instead becomes nearly impossible to swallow.

Most seafood restaurants have some variation of braised mussels and crab cakes, and Point Royal is no exception. Massively plump Prince Edward Island mussels arrive submerged in a pool of coconut broth so rich it's almost like tom kha kai soup. The crab cake is served as croquettes. A half-dozen golf-ball-size globes full of delicately seasoned crabmeat are paired with an appropriately addictive sauce.

Where Point Royal really hits its stride is the more entrée-like dishes. The shrimp-and-grits main course isn't reinvented, just executed beautifully. Head-on shrimp are cooked to tender perfection, mixed with a homemade shrimp and swordfish sausage, and set atop a creamy bed of Anson Mills grits. The dish is a reminder that you don't need to do new things if you do old things right.

One dish — the ricotta agnolotti in a Florida blue crab fondue — fails to land its punch, however. Made in house, it was inspired by a spaghetti and crab dish Zakarian remembers from a trip to London. His attempt to re-create the dish sounds divine, a simple pairing of blue crab with ricotta-stuffed, ravioli-shaped pasta. But the product is woefully undersalted, making it difficult to distinguish and appreciate the various elements.

For dessert, do something a bit unconventional: Try a piña colada. Ours took a while. The bartender disappeared for a few minutes into the kitchen to core and press a whole pineapple for more juice. But it came paired with a house coconut cream rife with bits of chopped coconut meat and dark rum in what is possibly the best frozen drink around.

This is not your typical hotel restaurant. "I didn't have an artistic urge with Point Royal," Zakarian says. "It was all about what the people of South Florida needed: a restaurant you can visit any day of the week, even if it's in a hotel."