With the reopening come several significant changes, including some grand plans for the future. Upgrades include the addition of four giant tiki huts that provide shade and seating for visitors to the market, along with live musical entertainment on the new main stage.

Menagh says the food hall, called the Station, will have an industrial feel and house about 30 vendors. Each stall will be equipped with its own sink, storage area, and a cooking area with a ventilation hood.  A fire-suppression system will permit the Station to accommodate deep fryers.

The Nest, an air-conditioned venue on the south side of the market, will be built out with a rustic look and offer office space as well as kiosks for sales of antiques, collectibles, and more.

Menagh says that the heart of Yellow Green remains the original market, where about half the spots are currently occupied.

"A lot of people didn't come back" after the closure, he explains. "We're dealing with small businesses, and people might have simply moved out of town." 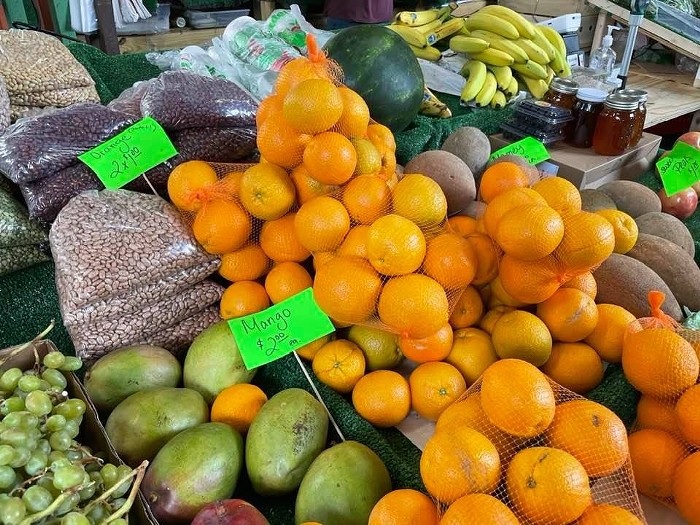 Fresh produce at Yellow Green Farmers Market.
Photo by Laine Doss
Menagh says the goal is to have about 450 vendors — a significant increase from the 350 who rented space pre-COVID. The trick is to make sure the vendors sell a range of items that people want to buy.

"I try to make sure every business here is unique," he explains. "I can't add another cupcake vendor. Anyone can sell cupcakes, but what if you're making, say, a Bundt cake soaked in Jamaican rum with a spiced frosting? That's a product that I would want."

Menagh cites a relatively new vendor — Wicked Bread Co. — as an example of a successful niche business at Yellow Green. "Nobody else at the market will sell you their cinnamon bread or interact with you the way they do," he says of the stand, which opened in 2020 just before the pandemic set in.

Space rental starts at $550 a month for an indoor space and $385 for an outdoor space. There's no lease, so vendors are free to leave if they're not successful — though Menagh very much wants them to be. "I look for entrepreneurs. I want people who have a vision of what they want to sell."

By his count, more than 40 successful businesses got their start in the market. "It's a proving ground," Menagh says.

Right now, the market is open on Saturdays and Sundays from 9 a.m. to 4 p.m., but there are plans to extend the hours until 8 p.m. At that point, Menagh images locals lingering after they shop to relax with a wine or beer from one of the on-premises bars.

"I can't imagine a market like this anywhere else," he adds. The year-round outdoorness of the market is very unique to Florida."

Yellow Green Farmers Market. 3080 Sheridan St., Hollywood; 954-513-2990; ygfarmersmarket.com.
KEEP NEW TIMES BROWARD-PALM BEACH FREE... Since we started New Times Broward-Palm Beach, it has been defined as the free, independent voice of South Florida, and we'd like to keep it that way. With local media under siege, it's more important than ever for us to rally support behind funding our local journalism. You can help by participating in our "I Support" program, allowing us to keep offering readers access to our incisive coverage of local news, food and culture with no paywalls.
Make a one-time donation today for as little as $1.