On a hot South Florida day, a frosty draw of vitamin-C-packed succulence sure slides down smooth. That's why the shake counter at Bob Roth's stays busy. This is a fruit stand where you can take home a slab of alligator meat or a fresh-baked key lime pie. And when it comes to shakes, you can bet they've got the real thing, none of that gooey strawberry syrup-type flavoring, thank you. Just fresh and frozen fruits, blenderized. You can order a creamy orange mango shake, plain and simple, or have mango complemented with banana, or mango-strawberry-banana, mango-coconut-peach, or mango-coconut-peach-banana. Or mix them all together. If you don't like mangoes, you can order any of those other fruits separate or combined any way you want to suck it. All at the sweet price of $3.50 for a three-fruit combo.

Fourteen years ago, Jeffrey Fisher decided that his future came down to one word: macadamia. So he planted more than 100 trees from a special hybrid that produces easy-to-crack nuts on his two-acre farm in Davie. But it wasn't easy -- Broward County officials told him that macadamia nuts couldn't grow in South Florida and refused to give him the regular agricultural tax exemptions. Out of that frustration was born his rather scandalous slogan, "Let Me Show You My Nuts." He proved them all wrong, and despite numerous setbacks, his vision has come to fruition. When he opens his farm to the public on weekends, he sells trees (from $30 to $75) and, of course, bags of nuts (at six bucks a pound). If you're lucky, Fisher will also have some of his delicious macadamia-nut honey and cookies for sale. The place is more than a real treat -- it's a great testament to a true South Florida visionary, however nutty he might be. 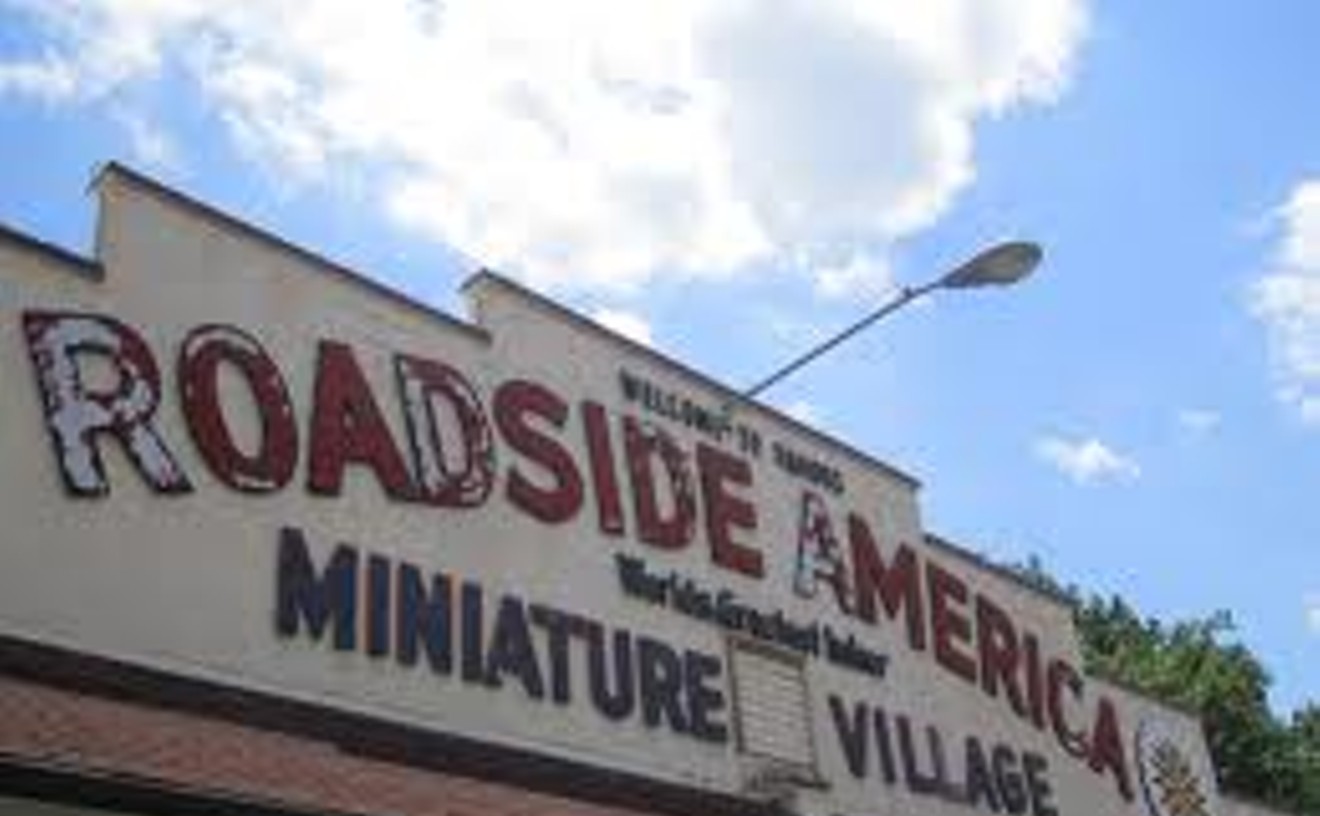 A visit to Penn Dutch is a celebration of Broward County's distinctive polyglot of humanity. The pathway to the cash register is blocked by a Haitian woman. The dairy case is momentarily inaccessible while a French-Canadian couple holds a culinary conference. Before one can grab a hot loaf of freshly baked Cuban bread, one must wait for an African-American family, shopping cart larded with shrink-wrapped rib eyes, pork loins, cold cuts, multiple packages of hog jowls, and several loaves of French bread poking out of the cart like strange cacti, to move. Mondays and Wednesdays are the slow days, according to an employee. But slow is a relative term at Penn Dutch. It's a madhouse on other days, she says. For the seafood consumer, that's exactly the point. Busy is good for seafood. Busy means the product moves. Busy means fresh. Penn Dutch must replenish daily. Plus, buying the quantity it sells, its prices are cheaper than most other markets. In the early spring, for instance, salmon steaks were $3.49 a pound, grouper filets cost $8.99 a pound, and yellowtail tuna filets were $7.99 a pound. At those prices, eating healthy won't give you an ulcer.

This special Albertson's has one of the largest and most eclectic selections of prepared foods in South Florida. The hummus with whole chick peas or fresh pinenuts is worth a trip in itself. It's not even in the same family as the pasty spread sold in most supermarket deli cases. Roasted chicken, stuffed derma, cholent, stews, soups, spring rolls, dozens of salads (eggplant, cucumber, vegetarian mock chopped liver), and a rabbi-certified kosher bakery will satisfy even an Orthodox grandmother. But if you want to mix your milk with your meat, they won't throw you out of the store. Two separate deli counters line an entire wall of the emporium. The non-kosher department has a full selection of meats and cheeses along with hot wings, fried chicken, half a dozen kinds of potato salad, cole slaw, and macaroni and cheese. Where else can you get a real knish for your bubbe and a ham and cheese sandwich for your Aunt Teresa?

Now, we know this statement is tantamount to wearing a Che Guevara T-shirt in a Cuban-exile neighborhood, but it needs to be said: The cafe con leche at Tulipan Bakery rivals any cup you'd get in Little Havana. But as a warning to those who think coffeehouse means comfy couches flown in from Seattle, this place is far from the chains. Here, there are no seats; you drink girlie sips of cortadito while leaning on the drab counter, which separates visitors from the team of women frothing milk behind it. Make sure to accompany those potent cups of joe with finger-shaped croquetas bursting with bits of gooey, hammy goodness. Or stuff yourself on flaky cheese pastelitos, with a caramelized coating of sugar and smooth cream cheese on the inside. And even though you're 60 miles from Miami, feel free to order in Spanish.

An outstanding barista possesses all the skills you'd expect in a top-notch bartender: sense of humor, gift of gab, willing ear, and flair for mixology. But a barista does so while manning a scalding espresso machine. Shaven-headed and occasionally goateed, Franklin can quickly turn the first-time patron into a regular by recalling a drink or a name or some other personal minutiae on a follow-up visit. He has a knack for drawing together strangers in line awaiting drinks by handing them a topic to kick around. He can regale you with the tales behind the dozen-or-so concussions he's received in his life, a few of which are certainly worth the price of a cappuccino. Eventually, he might tell you about how he once cajoled a Two Street regular into brewing up a pot of Scandinavian "egg coffee" on the premises. Of course, let's not forget Franklin's commission behind the counter in the first place: to deliver caffeine treats. In this, he's scrupulous, so don't be surprised if he dumps out a shot of espresso that he judges to have come out not quite right.

It's hard for a place that offers 50-plus burgers to displease. After all, if a customer doesn't like the taco, teriyaki, or turkey burger, he or she can always go further afield and sample something like the sea burger (barnaise and seafood salad). But even more important than not going wrong is going raw, which is the easiest way to prove the quality of the product here. Indeed, only a supremely confident burger joint would offer a tartare burger -- seven ounces of raw sirloin mixed with raw egg and served with toast points. Match a burger, raw or cooked, with a basket filled with deep-fried onion rings or sweet potato fries and you'll see why Lindburgers does the lindy around the competition.

Age-old question: What makes a hot dog great: the meat, the bun, or the toppings? Those of us who won't settle say you need all three to be truly satisfied. That's why we don't hesitate and aim right for the "Big Italian." A half-pound of all-beef dog is grilled, slapped on a ten-inch-long ciabattini (grinder bun), then smothered with sauted potatoes, peppers, and onions. The counterpoint of textures, from crisp skin to toothy potatoes, the medley of flavors from spiced beef to bell pepper, the lingering indigestion that brings a warm feeling to your heart all night long -- you couldn't score better from a pushcart on the streets of Little Italy during the San Gennaro festival while quoting Moonstruck and waving an Italian flag. You prefer the dogs somewhere else? Snap out of it!

Palm Beach County Commissioner Burt Aaronson ruined this category for us recently when he proposed punishing the homeland of Balzac, Renoir, and Moliere by renaming the fried potato. Responding to the French preference for conversation over ammunition in Iraq, this loon actually suggested terming spuds "freedom fries." In an effort to punish the frogophobe, we disqualified all Palm Beach restaurants from this category. Instead, we looked to Hollywood, where ragtag antiwar demonstrations were a staple of the spring. Argentango, the best of the bunch there, offers two kinds: regular and Provençal. The regular ones are crispy on the outside, tender on the inside, and go for $3.50. The Provençal types cost $4 and are sauted with garlic, parsley, and olive oil. The true epicure can skip the ketchup and add chimichurri, an Argentine steak sauce that includes lemon and garlic. Sure, the cost is steep compared to street-corner fast-food shacks, but Argentango's insistence on providing a full place setting for a mere side order of fries makes the extra couple of bucks a worthwhile investment. And though it can take 15 minutes to get the little papitas out of the kitchen, you won't regret visiting. At McDonald's, you can't drink Bud Lite while watching Jennifer Lopez dance half-naked on television.

Call it the college fix if you have to. But there's really no better remedy for anything ranging from depression to overindulgence -- except the freshman 15, of course -- than the San Loco taco. Whether you go for soft or hard, request chicken or beef, ask for it vegetarian or lacto-ovo, it doesn't really matter. The secrets are in the freshly made ingredients and the assembly, which is darn near perfect every time. And that's just the basic versions. Slap a soft shell filled with guacamole around a hard corn shell taco and you've got yourself a guaco loco -- Prozac, Pepto, and pure gustatory pleasure, all folded up in one.