The Morikami Museum and Japanese Garden

The state of dining in many museums is disappointing. You're part of a captive audience. What a pleasure, then, to know that after you've strolled the goldfish ponds and other loveliness of the Morikami's gardens, some fine and affordable Japanese food is waiting at Cornell, which overlooks all the flora and babbling brooks. Start with the seaweed salad, a plentiful plate mixed with sesame seeds and mild hot peppers in a vinaigrette sauce for $4.50. Tuna, shrimp, grouper, and salmon rolls run $4.50 to $5.50. But it's the luncheon specials that make the day. For the budget-minded, the beef bowl, at $6.95, is a meal in itself, with strips of stir-fried beef, onions, fresh mushrooms, and carrots. Jumbo shrimp in Asian leek sauce is a steamed delight that includes rice and vegetables for $8.95. For vegetarians, there's Asian eggplant with garlic sauce for $6.95. For the true Japanophile, there's the eel bowl, in which this favored seafood is baked in sauce and ladled over rice. Cornell is open from 11 a.m. to 3 p.m. Tuesday through Sunday. Admission into the museum is $9 for adults, $8 for seniors, and $6 for kids. 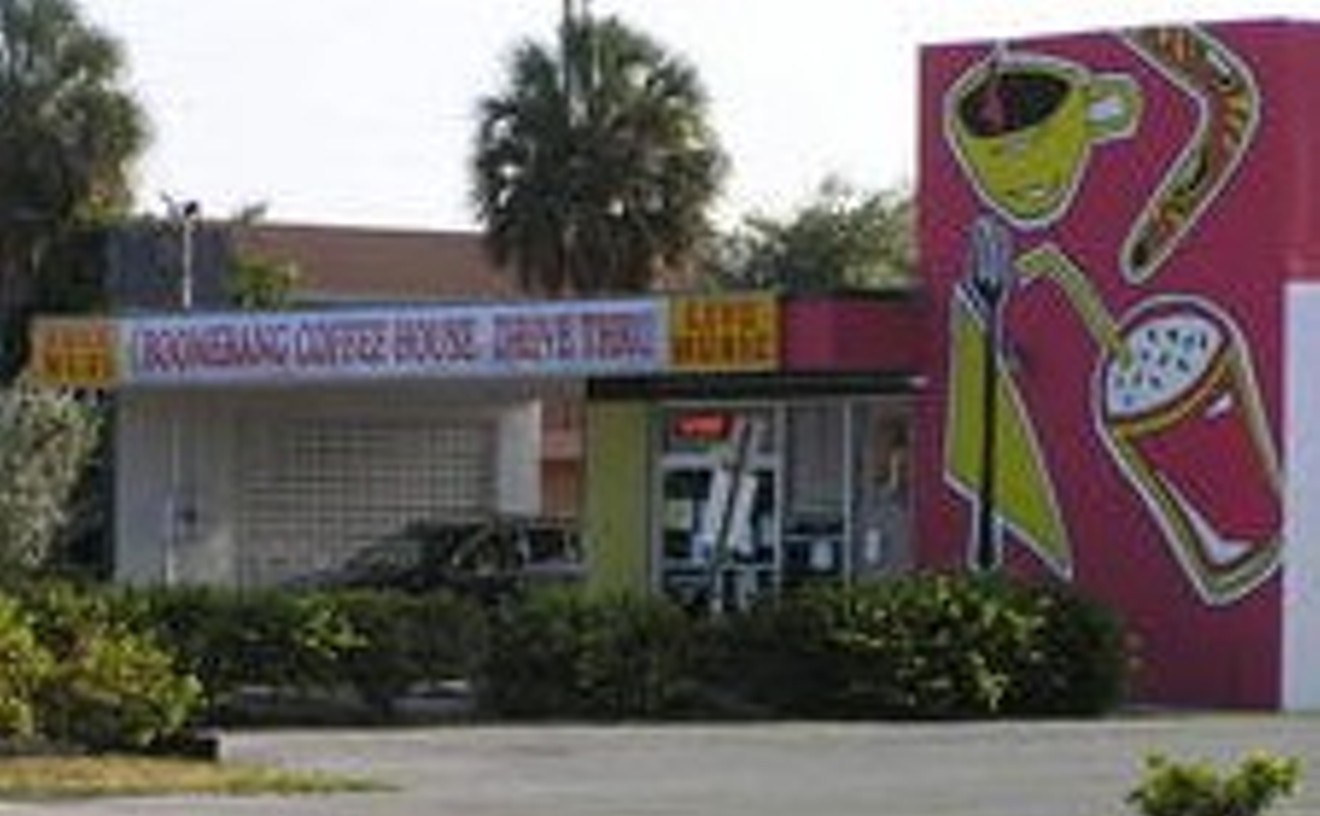 Across from the comfy half-moon couch in a corner of this roomy caffeine bar hangs a large black-and-white drawing of a rhinoceros. The animal's eyes glare menacingly, and his nostrils flare. Hasn't had his coffee, obviously. Or perhaps he just hasn't found the right place to drink it. Relax, big boy, you're at Boomerang, which is a bona fide coffeehouse, the kind the Northern folks take for granted. There's conviviality between patrons and staff that makes this a warm place to come. There is, of course, the lengthy and varied menu of coffee drinks, from the basics -- a cuppa joe for $1.51 or a single espresso for $1.42 -- to the more specialized concoctions, like a white mocha, which is espresso, white chocolate, steamed milk, and whipped cream, for $3.35. But it's the atmosphere that makes this a "house." On a recent Saturday morning, a jazz guitarist set up his laptop computer, which served as a backup band, and then began strumming a soothing sound. One young woman read a book as she reclined on the sofa. Others chatted quietly at tables. Of course, the rhinoceros was none too happy with the whole thing. But what the hell; he's only a picture.

There must be a lot of folks who were hopping mad to see York's Tropical Ice Cream pack up and move south from Washington, D.C., to Broward County. They've probably spent many a lonely, ice-creamless night wondering how to satisfy their jones for rose-flavored ice cream. And those hooked on grapenut, jacknut, cinnamon, tamarind, and lychee or accustomed to a regular fix of papaya, ginseng, or black walnut, not to mention the mild alcoholic fizz from a scoop of Guinness, are likely out of luck too. Their loss is clearly our gain. What we lack in political culture and great art museums, we now more than make up for in soursop, in decadent high-butterfat chocolate chip, and in R-rated rum raisin ice creams. Jamaican proprietor Cal Headley makes the stuff in a Lauderdale Lakes location, trucks it over to the store daily, and sells it for $2.50 a scoop or $5.70 a pint as he doles out sample spoons of the most luxurious fresh banana ice cream from here to Kingston. 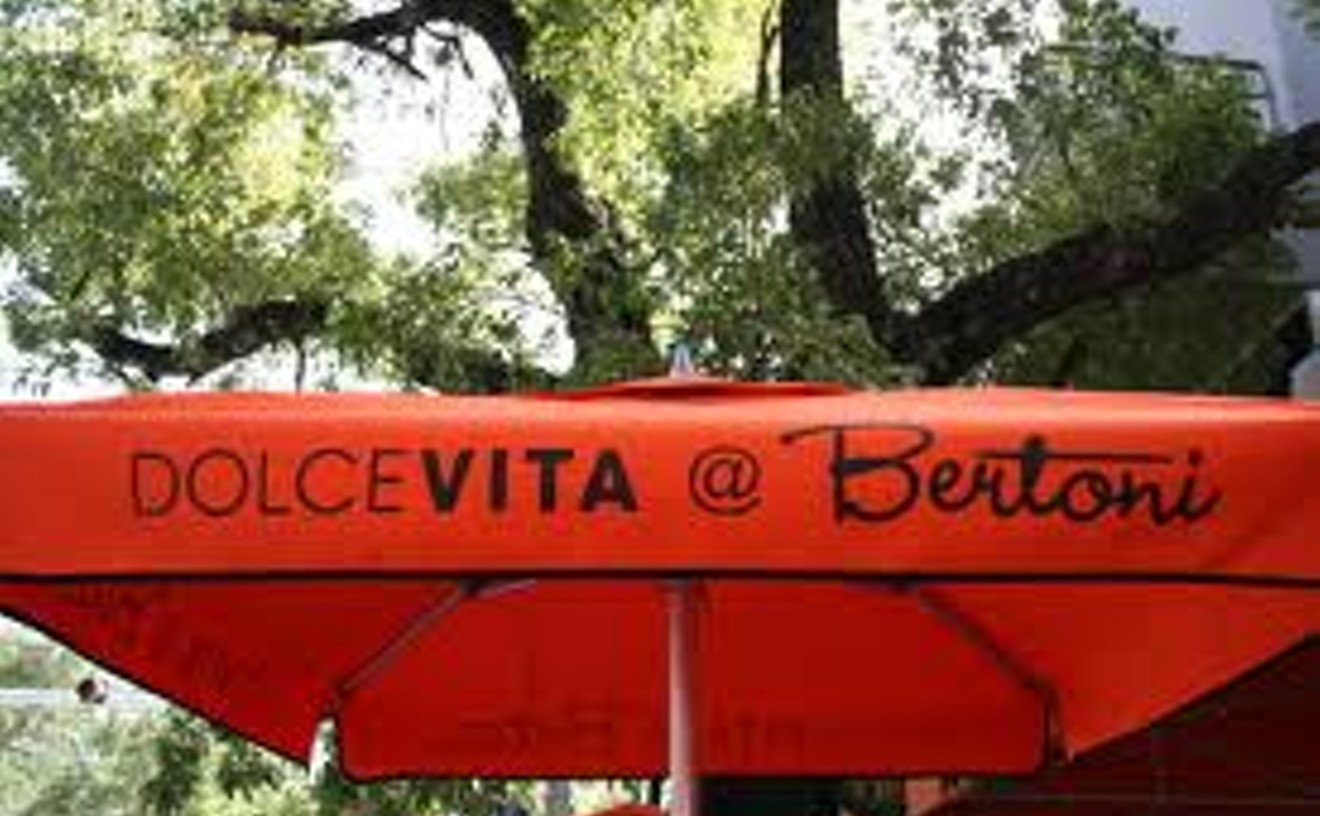 The perfect meal ends with a good dessert and this small store on Hollywood Boulevard -- the fifth of a small chain founded in Miami Beach -- makes the perfect sweet. This is not an exaggeration. The creamy stuff served by Italian/Argentine/American Julio Bertoni and his partner, Hector Enede, is unforgettable. There are 48 flavors, from chocolate to rum raisin to dulce de leche to super sambayon, a combination of egg yolk, marsala, and cream. Ay, it'll make your head spin. Prices for the stuff are as low as $3.50. Bertoni and Enede are ambitious. They are establishing free delivery at the year-old Hollywood store -- the first in Broward -- and plan to open places in Houston this year. They also serve the stuff at fancy hotels like the Mandarin Oriental on Brickell Key. But don't worry about all that. Just stroll in here after a meal on Hollywood Boulevard, taste to your heart's delight, then enjoy some of the most beautiful, cool flavor you've ever dreamed about.

Ladies who shop and then lunch have enjoyed leisurely afternoon tête-à-têtes at Belle and Maxwell's for years; it's time they scooched over their Chanel-clad fannies and made room for the rest of us. In the heart of West Palm's Antique Row, where uniformed chauffeurs keep the Bentley running while Madam dickers over the price of a Louis XIV end table, Belle & Maxwell's is an excellent place to lean back with a pot of Earl Grey and forget for the moment that the social contract is crumbling around us. The space is surpassingly luxe, calme et volupté, full of flowers and plump pillows; a back door opens onto a tiny, sunlit patio. Try the pear and gorgonzola salad ($9), a brie baguette with apple and walnuts ($8), or a slice of homemade quiche with gazpacho ($9), but damn it, don't skimp on the sweets! They're homemade by the ladies who run the place: key lime pound cake, chocolate croissant bread pudding, an almond joy tart, apple praline pie, chocolate espresso truffle cake. Ten bucks buys you a "sampler choice of four." Go get your just desserts. Open Tuesday through Saturday 9 a.m. to 5 p.m. 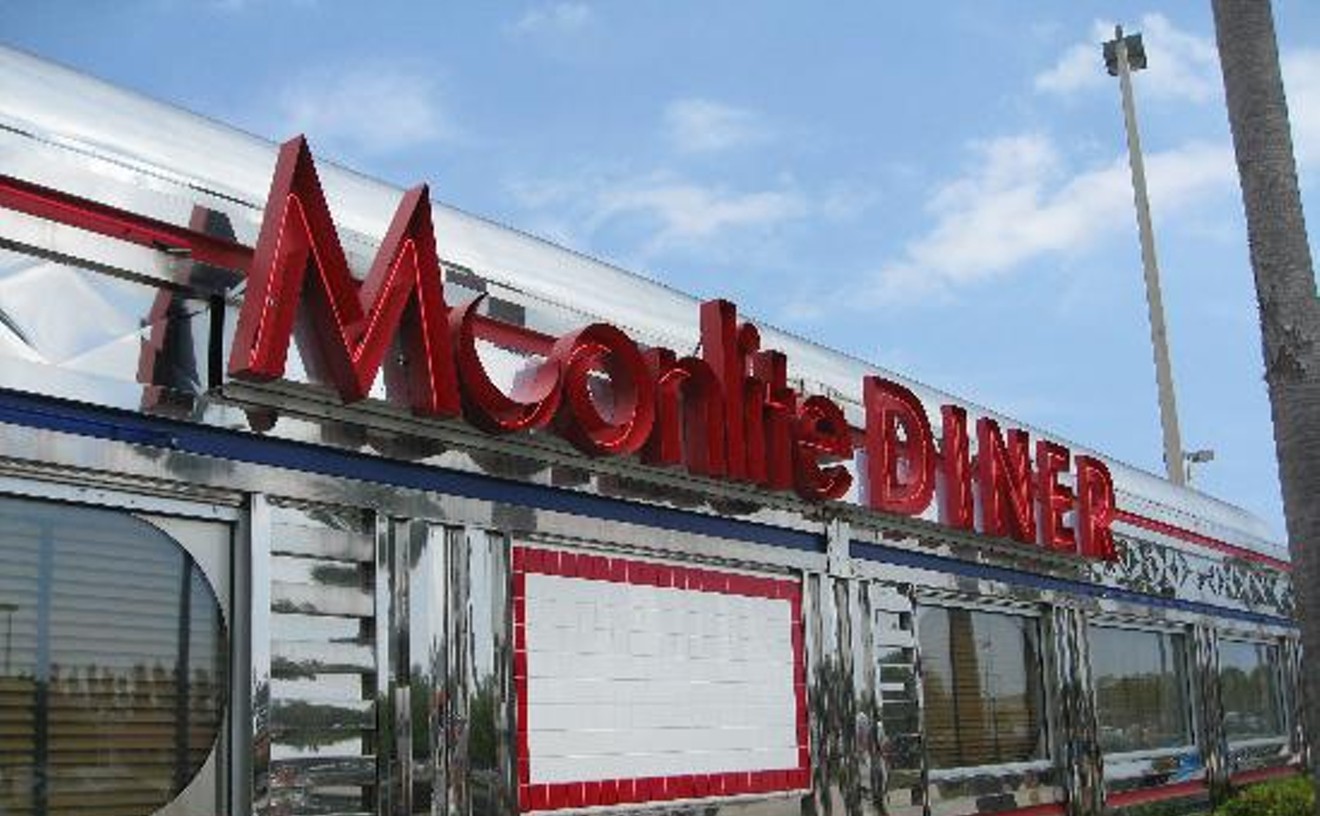 Sometimes, when it's 3 a.m. and you're half-drunk, you're prone to imagining things. In fact, you might very well think that your mind is playing tricks on you as you stand outside Moonlite Diner. Built to resemble a highway café from the 1950s, the place features stools and bars of the John F. Kennedy-era malt shop style. There's also enough rock 'n' roll memorabilia on the walls to make Buddy Holly proud. Then there's the food. This restaurant serves good, cheap eats 24 hours a day. Highlights include crab cakes ($7.69) served with a fiery Cajun sauce; the Mediterranean omelet ($6.29), an unpredictable egg dish with feta cheese and spinach; and the Meatloaf Blue Plate ($9.29), a hunk of oven-baked beef seasoned and shaped with the same love and care that your mama gave it. Finish everything with one of Moonlite's 24 flavored malts and shakes ($3.99) and you'll be left with the wherewithal to sleep off that nasty hangover.

To embrace Middle Eastern culture is to learn to enjoy overeating. Liberate yourself from those blindered Western values by throwing on a flowing, figure-concealing thobe and heading for this cultural island out west. The menu and service at al-Salam epitomize Middle Eastern generosity and hospitality in spirit, if not in the exact details; rather than press upon you a roasted filet of camel, Salam's gracious servers ply you with familiar Mediterranean dishes and a few scrumptious things that you probably haven't stumbled upon lately. Begin with a complementary starter of dates, olives, and pickled turnips. Move on to appetizers like kibi, hummus, and koddsieh ($3 to $7.49), then settle into the heart of your meal with selections from the evening buffet, which includes potatoes with tahini sauce, stuffed tomatoes, red peppers, and cabbage, chicken soup, and hummus ($11.99). Or try an order of shawerma ($7.99). It's considered polite to eat and pass plates with your right hand, so feel free to count calories with your left. A cup of cardamom-laced Arabic coffee is final proof of Allah's beneficence.

It doesn't take long for international ex-pats in South Florida to congregate with their own kind: Uruguayans have their clubs, Panamanians their hairdressers, Haitians their takeout restaurants, Poles their Friday-night dances. And the French have their bakeries. At Croissan'Time, you know you're in the right vicinity not just by the unmistakable scent of warm, layered pastry but from the recognizable buzz of French-speaking customers crammed together over tables crowded with beignet and brioche. Owner Bernard Casse opened Croissan'Time in 1986 after a string of apprenticeships and baking gigs in France and New York, including La Grenouille and Regine's. Locally, he wowed the Palm Beach crowd with delectable confections at the Little French Bakery before moving to Lauderdale. Casse and crew are still turning out hundreds of filled and plain croissants daily, hot from the ovens every couple of hours. You'll recognize chocolate or almond paste-filled varieties, but you may never have experienced the guilty pleasure of croissants stuffed with sour apricots and custard, tart raspberries, silky prunes, or walnuts, apples, strawberries, cinnamon, ham and cheese, or guava ($1.25 small, $2.25 large). They're flaky, buttery, each better than the next, and impossible to tire of. But if you're still craving variety, try the coffeecakes, the tourtes, a selection of charcuterie that includes mergez and boudin noir, game meats like pheasant and partridge, homemade ice creams, freshly cut cheeses, paté sandwiches, bacon bread, cream puffs -- a short, delicious tour of French gastronomy for any Lauderdalian who loves Paris. 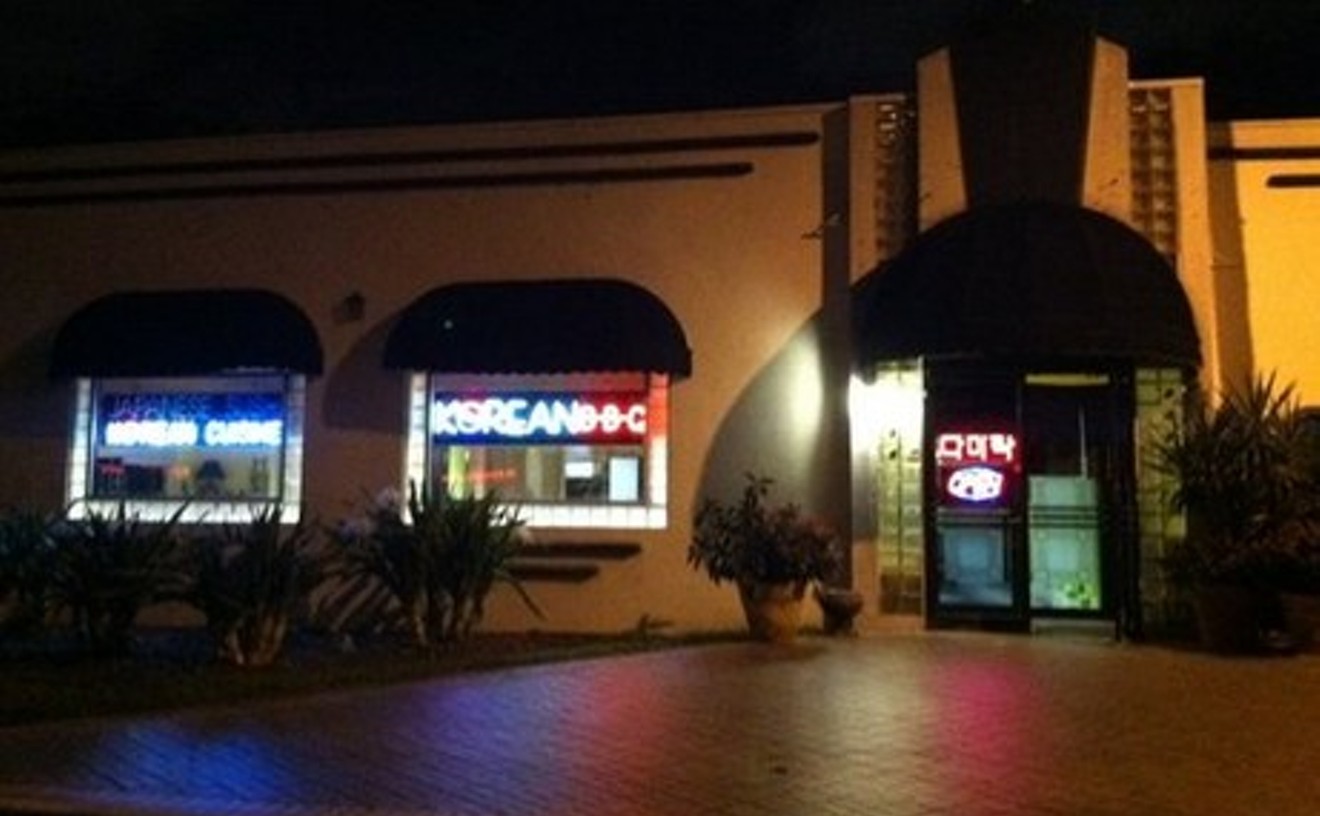 If heaven exudes a fragrance, it's the one that awaits when you step into Da Mee Rak. Korean barbecue is the specialty of the day here, with marinated beef, pork, and seafood sizzling and snapping atop each table-top grill. Once you've partaken of this distinct Asian cuisine, you'll wonder why there isn't a K-BBQ joint on every street corner. For first-timers, the best bet is the BBQ for two for $33.95, which includes your choice of three beef, chicken, shrimp, and pork plates. It's served with 12 side dishes -- many of them variations of kimchee, which is vegetables pickled in garlic, red pepper, and ginger. As you nosh on this bounty, the first plate of raw meat grills before you; you can tend it yourself or, if you want to concentrate on eating, leave the work to the skillful wait staff. For the more adventurous, there's beef tongue for $16.95 and marinated conch for $19.95. After you become a regular, try the octopus, eel, and "marinated intestine of cattle." Obviously, it pays to dine here as a group to get a wide tasting of meats. Wine and Korean beer are available for $3 to $4. Reservations are recommended.

The Baguette at Le Petit Pain

An NPR commentator once asked a French chef if he thought the Atkins Diet would ever catch on in France. "Mais non," the chef replied haughtily. "In France, we must eat one pound of bread every day for good health." No doubt for other reasons of vigor and well-being, that pound of bread must also be slathered with sweet cream butter, n'est-ce pas? And washed down with just a cup or two of hot chocolate to aid the digestion? The baguette ($2.50) at Le Petit Pain is the place to start if you're planning to follow the good chef's advice: the long, thin loaves, crunchy and buttery on the outside, pocked with delicate holes when you break them open, come warm from the oven a couple of times a day. The proprietors, a handsome and charming family hailing from Paris, have evidently picked up a few baking skills in their native country that have translated exquisitely to ours. They serve the finest from the baguettes, which have an unsettling tendency to become as necessary to daily existence as air, to their beautiful cakes, pies, butter cookies, fresh croissants, and filled crepes -- also highly nourishing when eaten in quantity.