Brush up on your Spanish, gringo, because few people at Atlakat are likely to speak your tongue, except when it comes to the universal language of great homemade food. But if you can open a menu and point, you'll be well taken care of at Manuel Chavez's Salvadoran café. Make a stab at the Sampler Platter ($12.99): fried pupusas filled with jack cheese, curtido (a marinated cabbage and carrot slaw) grilled beef chunks, fried pork chicharrones, and pieces of yucca and fried plantain. Give it all a squirt of Cholula hot sauce or a dunk in your bowl of hot tomato salsa and you've got a meal. Er, well, actually you don't. El Salvador may be the smallest country in Central America, but its appetites are big. Witness those burly workmen polishing off plates of tamales and grilled chicken. Now take a deep breath and order yourself a monster bowl of seafood soup ($13.50) or the Atlakat Special ($11.95), a forearm's-length strip of grilled sirloin, a grilled breast of chicken, and four jumbo grilled shrimp. Granted, you won't be able to finish it, not with those sides of fried yucca, red beans, and rice, but your waitress probably understands the universal sign for "Much as I'd love to, I can't choke down another morsel." (Point finger at unfinished plate, then at belly straining shirt buttons. Shake head wistfully.)

Benny's on the Beach

Philosophical question: How can you tell the dancer from the dance? How to separate the French fry from its environment? If you could surgically remove, say, that single Benny's fry -- crisp, salty, and golden -- from its plate and whisk it away from these surroundings -- the wooden pier, the gossiping pop and suck of the wavelets, the aromas of Hawaiian Tropic, salt air, and trolley exhaust; if you could spirit it to a place free from the absurd Technicolor tangerine hues of the setting sun and the ocean's sad, late-afternoon turquoises, from the babble of flirting couples and cranky tourists, and the high whine of a drive-time traffic report from a forgotten radio -- would it still be the same French fry? Or would it have become something else entirely?

Blather all you want about authentic Mexican food, but how do you know it? The old lady in the kitchen pressing tortillas? The "secret" spice recipe? Maybe it's a menu that unabashedly sells tongue burritos ($3.50), tripe soup ($6), pork skin tacos ($1.50), and shrimp/octopus cocktails ($7.99). You could count the number of Mexican families crammed into a tiny room on any given Friday night or point to the queue of exhausted migrant workers lined up at the taco truck in the parking lot. The average price of a meal hovers around $5; the place is lavishly decorated with glittery streamers and balloons for every single holiday, from Valentine's to St. Paddy's to Cinco de Mayo. The mariachi and norteña music blaring at eardrum-splitting decibels could be the dead giveaway. Some might argue that you really know "authentic" when you can drive up to the to-go window at 4:45 a.m., seven days a week, and come away with a carton of spicy pork tacos ($1.50 each) that will satisfy any longing you're suffering at that blasted hour.

Tacos Al Carbon nails each and every one of those. But what really sets this moving-and-shaking, ever-evolving little goldmine apart from the corporate taco mongers is that nothing ever tastes the same twice. You may get a green sauce with your taco de chicharron that will peel the roof off your mouth. Then again, that taco might come with a cool tomato salsa bursting with cilantro and onion. A basket of corn tortillas, puffed and warm straight from the fryer, might arrive at the table at no charge, or then again, no dice. Your "veggie" burrito ($2.99) could have just about anything in it that can't be slaughtered and thrown on a grill. And then there's that mysterious menu item described as "other kind of meat..." 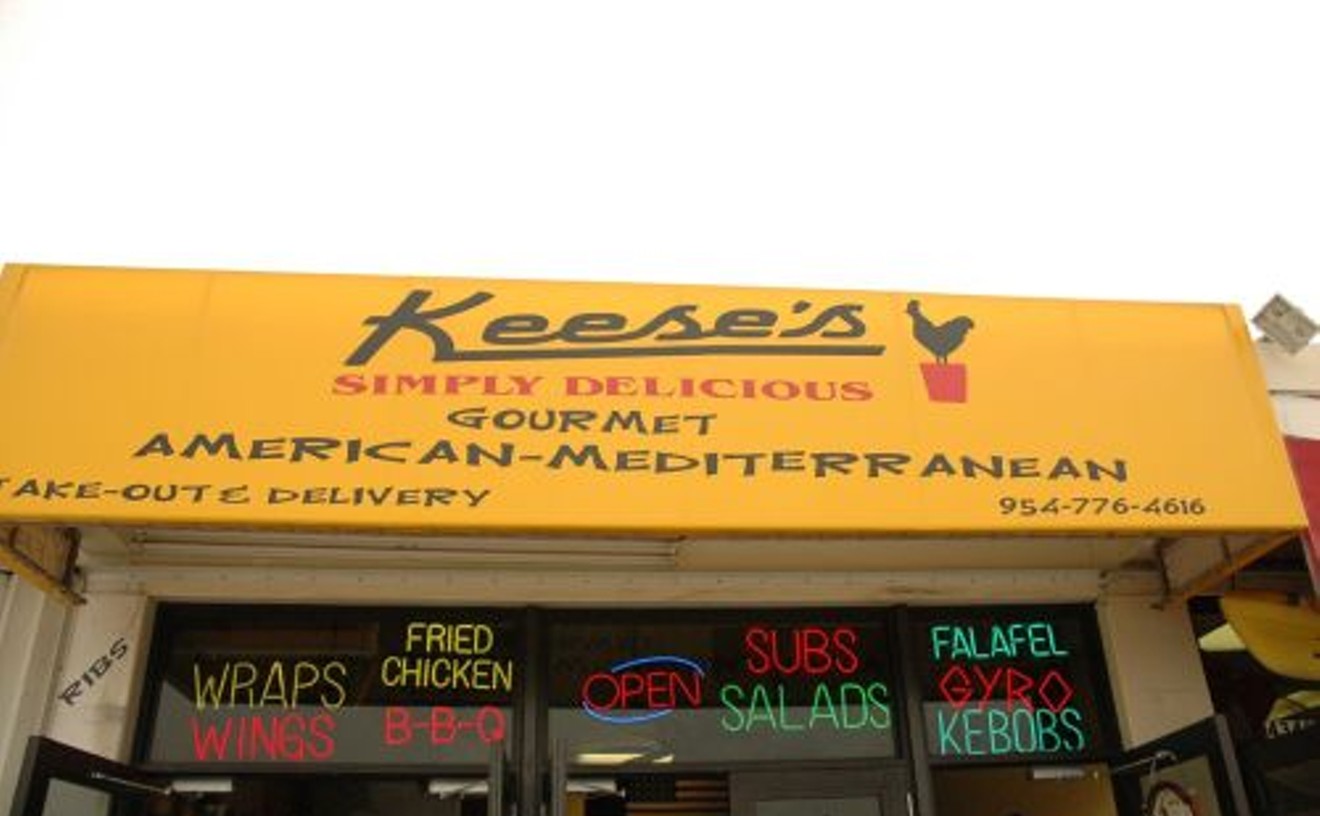 Big breasts. Hot legs. Juicy thighs. Isn't fried chicken the best? For more than 40 years, Keese's Simply Delicious has dished out perfectly spicy, sublimely crispy, just-greasy-enough pieces of fresh-fried heaven, even keeping its old family recipe through several management and ownership changes. But besides the fine fowl, Keese's has the advantage of its almost-oceanfront location. So order your two-piece/two-side dinner -- for less than six bucks. (Try the slaw and the intriguingly spiced baked beans). While you wait the requisite 17 minutes cooking time, brown-bag a beer from the gas station across the street and stroll past the tacky-yet-charming shops and cafés of Lauderdale-by-the-Sea's pier district. By the time you make a leisurely lap, your food will be ready to grab and carry back to the beach for a seaside picnic. Just be wary of jealous bystanders. Keese's chicken looks and smells as good as it tastes.

Those of us who have taken to barking incessantly about the insulting lack of quality in everything these days -- the DVD player that skips whole movie scenes first time you plug it in, stylish steak knives that break off in your T-bone -- will cherish Salerno's for every drop of its home-made, carefully tended red sauce, its freshly made gnocchi, tortellini, and spinach fettuccini, its imported provolone and mozzarella. Sing arias of grazie to Tony Salerno for being a decent guy who couldn't live with himself if he charged more than $3.25 for a delicious bowl of Italian wedding soup. A hot sausage and pepper sub, supersized, can be had for $6.50 here, and you know when you get it home and peel off its greasy wrapper, it's going to taste better than you dreamed possible. A plate of rigatoni, served with a salad and dripping garlic rolls, will fill your belly without emptying your wallet. The only surprises here are good ones, like a shrimp, scallop, and bacon pizza (at $27.95, the most expensive pie on the list). And the only secrets have been passed down through generations of Italian cooks. Pass them on.

When you order chicken wings, you want the whole shebang: a lopsided w of drummie, drummette, and that extra pinky on the end that functions best as a handle. That's what they serve at this tiny, carryout-only soul-food joint. A ten-piece box sells for $5.50 and comes in four varieties: mild, hot, lemon pepper, and "the famous Pompano Wings." The latter are bathed in a sauce that's neither hot nor exactly sweet. Neither spicy nor bland. Call it a flavor not found in nature. Gray's makes it easy to fulfill your fowl cravings, as it's open 6 a.m. to 10 p.m. on weekdays and until midnight on Fridays and Saturdays. They deliver with a $20 minimum order.

Short of booking a flight to Italy's Amalfi coast, you're not going to find a whole bunch of restaurants where the waiters address you as madam, whip out plates of char-grilled calamari on shredded artichoke and arugula salad, uncork your wine with a flourish of white linen, appear with glasses of chilled, homemade limoncello, and prevail upon you with samples of biscotti. That such a place exists in backward bumpkin Lake Worth, where nothing happens but a lot of bickering over whether to sell a parking lot, is, frankly, surreal. And if things weren't mysterious and melancholy enough, when was the last time you saw a $38 piece of fish on a menu? My dear, you've stepped into the zone; relax and enjoy it. And if you can't find somebody to pay for your pleasure, Paradiso's $48 prix fixe menu, served nightly, is an epic five-course bargain, if for nothing else than the opportunity to bask in the glow of so much masculine pulchritude, all of it dressed in snappy black suits and silk ties and sporting Mediterranean accents. From the first course of eight little bites of bliss -- tuna tartare, grilled eggplant, mozzarella di bufala, among others -- through the pastas and mushroom risotto, the grouper Livornese, the venison in balsamic reduction, to the perfect little plate of sweets and your limoncello cream, you know they weren't kidding around when they named this place Paradiso.

Sure, you say, "You think I'm going to drive across hundreds of acres of sugar-cane fields just for a piece of meat?" Well, take heart in this: You'll float back home after you try this melt-in-your-mouth slab o' heaven. Jellyroll's offers a solid assortment of "upscale" soul food, but the chicken-fried steak and brown gravy, for $6.95, is the best. It includes a choice of two side dishes, among which are green beans and ham, black beans and rice, and collard greens (cooked with liberal portions of pork). The steak is lightly breaded and fried to a delicate crispiness. The restaurant is visually appealing too, with antique collectibles and old-time photos of Pahokee displayed throughout its brightly lit interior.

Nothing in life feels quite as sweet as being on your way up. And Chef Michael Blum's star sure looks to be rising over the Hollywood skyline. Blum's new restaurant on Harrison Street is the culinary equivalent of a blockbuster or a box-office smash: the one thing everybody's gotta see and all your neighbors are talking about. Patrons brave enough, or early enough, can snag a seat at the granite counter and watch Blum and his minions perform pyrotechnics over open grills a few feet away. Come a little later and you can sink into a leather banquette and prepare to be spoiled rotten by a bevy of servers and sous chefs. Blum's larger-than-life dishes, some of which are served on Home Depot-style floor tiles, are as delicious as they are dazzling. This transcontinental menu sails from port to port -- Asian-inspired yellowfin tuna martinis in their elegant, long-stemmed glasses ($14) to American quasi-classics like candied pecan-coated grouper ($25) and specials like rich osso buco. Armchair travelers go 'round the world in 80 minutes and then find themselves safely back where they started, happier and wiser.

Maybe you've noticed the high price and low quality at the supermarket: America is currently undergoing a tomato famine. Well, not so much a famine as a shortage, which makes the sumptuous, fresh-tomato-topped slices at the Cannoli Kitchen all the more impressive. Existing in the culinary nether-region between New York thin crust, Chicago deep dish, and California gourmet, Cannoli Kitchen's slices come in 17 "signature" styles, like chicken fiorentina with ham, spinach, and mozzarella; Mexican with ground beef, salsa, lettuce, tomato (fresh!), green peppers, and cheddar cheese; chicken Alfredo; portobello; and the divine artichoke with sun-dried tomatoes, black olives, capers, and mozzarella. Takeout slices ring in at just over $3, and there are plenty of other Italian specialties -- including awesome hot and cold subs, pasta, and seafood, all at modest prices. If you like thinking in the long term, grab three fresh-frozen slices for five bucks. Now that's a cool deal.